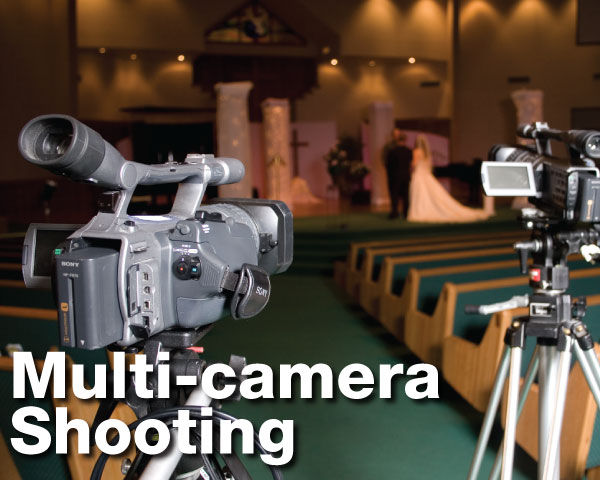 Videographers are not just storytellers, they’re also the keepers of our memories – which is an amazing responsibility. While a director producing a fictional piece can reshoot a scene again and again until it’s captured perfectly, real life doesn’t afford us the ability to go back and do it again. The garter toss that’s missed once, is missed forever.

For this reason, many videographers capture important events with multiple cameras – this not only ensures that if one camera misses some critical action, it will be caught by another, but it also makes for much more enjoyable viewing. After all, you wouldn’t watch a sitcom that had only one camera angle set to a wide shot of the entire set, so why should you watch a video of a school play that way?

Multi-camera shooting can be done in several ways, some complex and expensive, some easy and (relatively) cheap. We’ll look at a few different methods here. 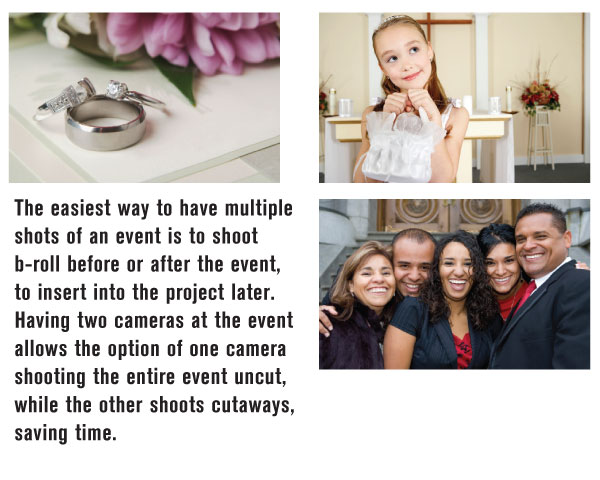 The easiest way to cover an event with multiple cameras is to have a second shooter grabbing “b-roll” – “b-roll” is “other stuff” that isn’t typically the main attraction. During a wedding, “b-roll” might consist of shots of the audience, close-ups of the flower girl, pans across the building, or even a parking lot filled with cars. B-roll allows you to cut from the main event, which you may do to cover a camera move, or to keep a scene from dragging on. Most often, b-roll is not synched, you don’t know if the flower girl actually yawned before, during, or after the long-winded sermon, the close-up of the bride’s father wiping a tear away could have actually happened at any time. You can even do this with one person, putting one camera on a tripod to get a master shot and then running around getting closeups with a second camera. Un-synched b-roll is easy to do and adds extra depth to your shooting.

Synchronizing multiple cameras is a little trickier, but it will allow you to cut back and forth between two cameras at exactly the same moment – extremely useful when you have video and audio tracks that need to stay together, such as musical performances or dances. Lots of modern cameras have built in time code which can be controlled from an external source, but without such equipment, you can use the same method Hollywood’s been using for nearly a hundred years to synchronize audio and motion pictures that are recorded separately – an easily definable event of a short duration recorded by both. When film and video are recorded separately you need a visual cue and an audio cue that happen at the same time – traditionally this is made by a “clapper” or “sticks” – some guy in a baseball hat steps in front of the camera with a clapper and says “scene three, take four” and bangs the two parts of the clapper together. This makes a noise (“clap!”) and an easily definable visual, the clapper snapping shut. These can be aligned in the editing room and the audio and visuals will stick together. Since your camcorders are synching audio, you only need a visual clue, such as a still camera flash which will work for multiple cameras across a room – having someone stand in front of the cameras and clap their hands together works too. After you’ve synched your cameras this way DON’T STOP RECORDING or you’ll lose your synch. Also, if your cameras are using tape, they may eventually drift apart and need to be re-synched due to the inexact transport speeds. Practice at home to see how long your cameras stay synched.

Easy / Expensive: Let the computer do the work 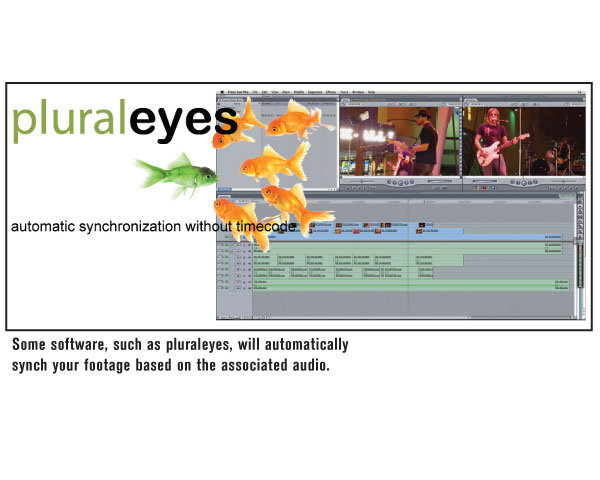 Computer programs such as Singular Software’s “PluralEyes” can do your synching for you. Pluraleyes ($149 or free demo at singularsoftware.com) will let you drop multiple clips from different cameras into Final Cut Pro and it will automatically figure out where they belong on the timeline based on the associated audio. 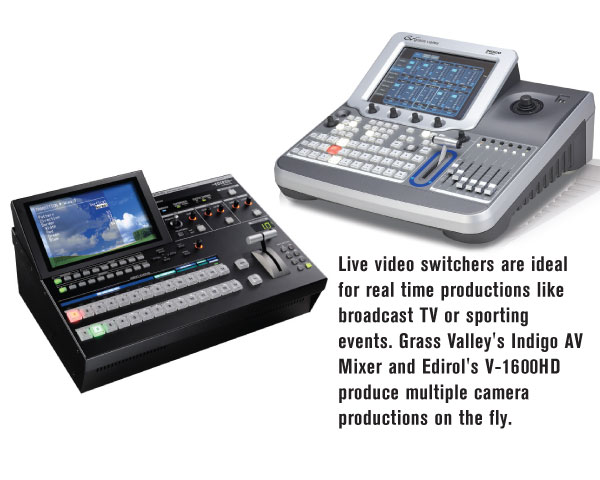 Live switching multiple video sources is a wonderful thing. It allows you to not only have a multi-camera shoot, but to have a near finished product as soon as the curtain drops. The idea is that the video from all of your cameras comes through one switcher and a director, looking at multiple monitors, decides which source to make “live”. This is how live television is done – nobody wants to wait around for video of a baseball game to be edited together to watch it – that went out with newsreels – today we want to see things as they happen.

With a switcher like Edirol’s Roland V-8 ($2,200) a director can choose between eight video inputs, including not just cameras, but computers as well, and switch between them using one of a number of effects like dissolves, fades, and wipes. TBC (Time Based Correction) will ensure that the input signals are synchronized and you’re not trying to cut in the middle of a frame. Multiple video outs can go to displays or to recording devices.

This requires not just cameras, but cabling between them and a place to set up your switcher. As this gets more complicated we get into:

If you’ve ever been to a huge event that’s being recorded, like a political convention, pro sporting event or a concert where a professional DVD is being made, you will see a semi-truck parked out front with bundles of cables running from it into the venue. Inside this mobile production truck is a control room which will house producers, directors and audio engineers as well as monitors for all the video feeds and audio devices. While all this equipment can seem expensive, it can actually be very cost effective in that the product is done on the fly and lots of time is saved in the editing room.

What’s Right for Me?

Stepping into multi-camera video shooting is a “next level” in video production and essential for some types of videography. The level of sophistication you need will, of course, vary depending on what you’re producing and how often you’ll be doing it. Many cities have video equipment rentals that will let you try out things like switchers for an afternoon.

And as is always the case with video production: Don’t experiment on important events – be sure that whatever new techniques you’re using you try them on dedicated test projects first rather than find out at the end of the concert that your video switcher wasn’t outputting to your recording device.

In the 2002 Vin Diesel action adventure xXx, Director Rob Cohen and Cinematographer Dean Semler filmed a sequence where a brand new convertible is driven off of the Foresthill bridge in Auburn, CA. The car plummets nearly 750 feet to the ground but at the last minute, the driver parachutes out and lands safely. Obviously, this isn’t a stunt that anybody wants to do twice – and not just because of the price of new convertible sports cars. To make sure that they had the coverage they needed, Cohen and Semler shot the scene with 20 cameras running simultaneously. In the editing room, the video was spliced together to show the stunt from a variety of camera angles to give the viewer the greatest thrill.