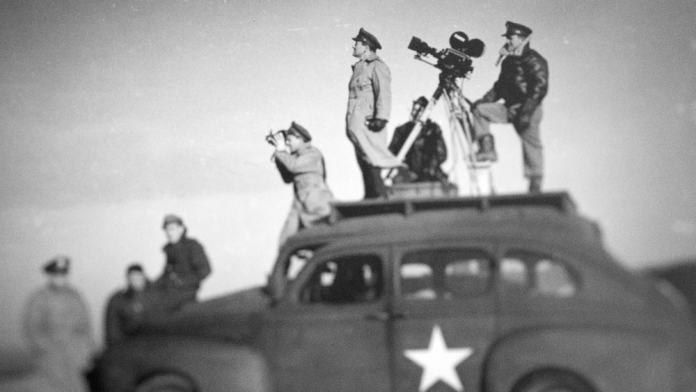 Iconic Hollywood director Steven Spielberg makes his observations about the power of film in the documentary series Five Came Back. Based on the 2014 book Five Came Back: A Story of Hollywood and the Second World War by Mark Harris, the three-part Netflix original makes compelling viewing for doc enthusiasts interested in exploring the tensions between documentary and propaganda.

Riveting are the stories of five legendary Hollywood directors, who were seconded to lend their cinematic know-how to the war effort. Frank Capra (It Happened One Night 1934); George Stevens (Gunga Din 1939); John Ford (Tobacco Road 1941); Willy Wyler (Wuthering Heights 1939); and John Huston (The Maltese Falcon 1941)– all makers of classic Hollywood entertainments, were given military commissions and promptly reinvented themselves as documentary makers and as masters of propaganda.

Vocabulary.com offers a useful definition: propaganda is the spreading of information in support of a cause. It’s not so important whether the information is true or false or if the cause is just or not — it’s all propaganda.

Of the five directors, Frank Capra, understood this the best. Capra, who would go on to make the holiday classic It’s A Wonderful Life (1946), was personally recruited by FDR’s top soldier, General George C. Marshal. Capra went to Washington immediately after Pearl Harbour and remembers Marshal telling him the problem. “We have 20 million kids in uniform – how to put in the minds of young kids the necessity of why they were in uniform. I think it should be done with film. We’ve tried it with lectures we… tried it with books.”

Capra claims he never saw a documentary. “I thought documentaries were films that rich kooks made,” says Capra in Five Came Back. But the work in Why We Fight is rich with evidence of how quickly and completely Capra and his Hollywood collaborators mastered the craft. The seven-part indoctrination series, not to be confused with Eugene Jarecki’s 2005 one-off about the ‘military industrial complex,’ was produced for the war department between 1942 and 1945. Capra would break new ground in the art of harnessing previously unconnected archival material and newsreel footage to make seven cinematic and persuasive compilation films.

“The film was the ominous prelude to Hitler’s holocaust of hate,” wrote Capra. Legend has it that the totalitarian terror on sweeping cinematic display in Triumph energized Lt. Col. Capra to launch a propaganda war of his own.

”How can I possibly top this?” Capra recalls in a post-war interview. But he knew exactly what he wanted to do: “We shoot nothing. We use their own stuff as propaganda for ourselves.”

In Why We Fight Capra combines Riefenstahl’s powerful use of iconic nationalist imagery with the rhythmic punchiness of 1930s March of Times newsreels. Averaging under an hour in length, the films were compiled from captured enemy footage, allied combat films and government archives.

From these raw materials Capra masterfully crafted engaging history lessons that included patriotic re-enactments, animations of the geographical history of the war provided by Disney Studios and Walter Huston’s colloquial but convincing narration aimed at an audience one third of whom had not finished high school.

With purposeful, rhythmic editing (average shot length: 3.5 sec.) and a repetitive patriotic music score, Capra pulled all the levers on his propaganda making machinery to make something that was as stirring as it was educational. Vivid examples of history instruction intersecting with indoctrination can be found in Capra’s first and last films in the series, Prelude to War (1942) and War Comes to America (1945)

Mexican film director and screenwriter Guillermo Del Torro (Pacific Rim, 2013) interviewed in Five Came Back says, “Capra takes a route that is unique in propaganda. He makes it folksy. Hitler came across like Charlie Chaplin. If it weren’t for so many people being killed, it was comedy.”

Some of Capra’s Why We Fight narration scripts were infused with oversimplifications and racialized, cultural biases against the enemy. American University film historian Richard MacCann described Why We Fight as a “combination of a sermon, pep talk, and a barroom bull session.”

As for the other four directors who served with US Naval, Army and Air Force units across war theatres in Europe and the Pacific, each approached the documentary form in his own way. Although none resorted to Capra’s overt propaganda toolkit, some did make considerable use of Hollywood-sized staging, including battlefield re-enactments with the full backing of US military resources.

George Stevens (Nazi Concentration Camps 1945) was ordered to drive tanks through villages that had already been liberated and shell them again for the cameras.

John Houston (The Battle for San Pietro 1945) arrived in San Pietro several days after the battle when the town was already reduced to rubble. Using coordinates from battle reports, Huston ‘meticulously recreated’ the three-day siege and liberation of San Pietro. With military resources to make things go boom, and US soldiers and liberated locals playing themselves, Huston recreated the intensity of close combat complete with simulated camera shakes and knock-outs. Only the footage of wounded and slain soldiers filmed by combat cameramen earlier was real.

Eisenhower hand-picked John Ford and George Stevens to document the Normandy invasion. With 100s of cameras, Ford and Steven’s film units landed on D-Day to carry out Ike’s instructions: “Don’t put yourself in unnecessary danger. Focus on what you see. Take pictures of everything.”

Stevens who shot all across the European theatre including the liberation of Paris and the Nazi death camp at Dachau, emerged as a documentarian who ‘did not pre-determine what he wanted to see.’ Preferring to train his cameras on what was going on, Stevens did not shy away from showing the horrors of war.

William Wyler (The Memphis Belle: A Story of a Flying Fortress (1944)) would also rather record actuality than re-creations. When it was suggested to Wyler he fake the bombing missions and use miniatures to shoot Memphis Belle, he refused. Instead Wyler took flight training lessons and went up with the crew to shoot harrowing aerial combat footage to tell the dramatic story of a US bomber crew on its last run before being shipped back stateside. Wyler did have the crew re-enact their dramatic exchanges during the heat of aerial combat over Germany once they were back home.

All five directors left the military changed men and went back to their Hollywood careers to make films that bristled with social realism — films ‘that are about something,’ as Wyler expressed it. None of them ever made a documentary again.