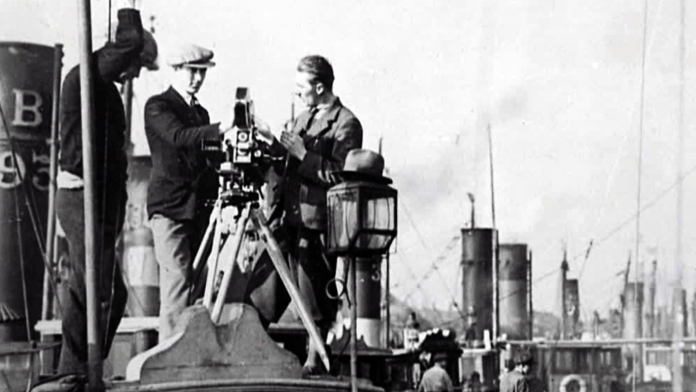 The orbit of John Grierson’s legacy touches almost everything we know about documentary. The five-foot something Scotsman with an orator’s voice single-handedly birthed the documentary form when cinema itself was still in its infancy.

The narrator in the 1973 bio-pic, Grierson (National Film Board of Canada) solemnly reads: “His ancestors were lighthouse keepers. He himself spent a lifetime seeing to it that movies were made and used in ways no man before him had imagined.”

Grierson made it his life’s ambition to put film to a social purpose. “Film can be mobilized in the public service to give image and perspective to the national scene,” is how he put it.

Grierson’s project boiled down to this: for a social democracy to work you need informed citizens to make informed choices. The emerging new medium of cinema would become Grierson’s social education delivery system. Here’s a Cliffs Notes version of how Grierson, the godfather of documentary, earned that distinction.

Grierson was born in 1898 when going to the movies still meant going to a Kinetoscope parlour peeping into a flickering projection box; but screen projection technology, so important to Grierson’s social education enterprise, was just around the corner.

Born into a large family that wasn’t afraid to argue politics over dinner, John Grierson was a labor organizer in Glasgow during a time of massive poverty and social unrest.

“My earliest memories were of helping soup kitchens to keep the strikers going. I must have been on a soapbox by the time I was 16,” says Grierson in the NFB film.

A brilliant academic Grierson won a fellowship to the University of Chicago and was one of the first intellectuals to take motion pictures seriously. He was a respected commentator, writer of film criticism and researcher interested in how media influenced public opinion.

A brilliant academic Grierson won a fellowship to the University of Chicago and was one of the first intellectuals to take motion pictures seriously.

Grierson studied the pioneering work of Dziga Vertov (Kino Pravda 1922) who made reality-based Soviet propaganda films to stir mass support for the new communist order. He admired the work of avant-garde filmmakers in the 1920s who made European Symphonies, impressionistic films of panoramic urban landscapes and reality scenes from daily metropolitan life.

Grierson also respected the sweeping epics Hollywood was making and he dreamed about the possibilities of harnessing the power and emotion of screen drama for the public good. “If you dramatize things, if you presented them in dramatic form, brought them alive as distinct from giving information you might find a way of illuminating the modern world,” says Grierson.

While in Hollywood, Grierson met and became friends with fellow documentary icon Robert Flaherty (Nanook of the North, 1922) who Grierson credits with laying the foundations of documentary film before the genre had a name. It was Flaherty’s 1926 docufiction film Moana about Samoan culture that prompted Grierson to coin the term.

Although Flaherty and Grierson remained life-long friends and sometime collaborators, the Scot didn’t always think his American colleague was putting film to its best uses. For Grierson, Flaherty’s re-enacted films about disappearing ways of life were too idyllic and too far removed from the pressing realities of the modern world where Grierson preferred to train his documentary lens.

Grierson returned to England in 1927 with a highly charged social conscience and started to make the kinds of films he wanted to make. Instead of going to commercial film studios for backing, he went to the government. He had little trouble persuading the Empire Marketing Board to adopt film as its primary public relations tool.

Grierson made his first film, Drifters (1929), out of his one-bedroom apartment using the kitchen table as an editing bench and the bathroom as a projection booth.
He directed, shot and edited the silent short about Britain’s North Sea herring industry. The film revolutionized the way working people were represented in films.

In a talk show interview decades later, Grierson told the host, “Let it be noted that it took this long to get a working man on the screen other than as a comic figure.”

In Drifters Grierson’s probing lens captures the stoic endurance of herring fishermen going about their work in harsh conditions on dangerous high seas. Drifters demonstrated new possibilities for the use of film by heralding the cinematic power of unstaged actuality.

The man who once defined documentary as ‘a creative treatment of actuality’ was also the man who ‘terrorized and inspired’ the first generation of English speaking documentary filmmakers. After Drifters, Grierson directed only one more film himself but would influence and guide hundreds of others. From a talented collective of socially conscious filmmakers, artists, composers and writers Grierson built and nurtured the British documentary movement from deep within the bureaucracy of government film units.

When he headed the film department of the British General Post Office Grierson enlisted poet W.H. Auden, composer Benjamin Britten and sound designer Alberto Cavalcanti to bring a creative treatment to the actuality of mail delivery. The result was Night Mail (1936) a message film about the dedication and efficiency of the postal service. The film became a documentary classic and is still seen as a British documentary landmark.

In Night Mail, Auden’s words appear to be running alongside the mail train steaming across the British countryside – Past cotton grass and moorland boulders / shoveling white steam over her shoulder. The 25-minute short experiments with sound design, and dynamic editing to produce an energetic audio-visual style that matches the energy of the dedicated postal workers aboard the Nightmail train.

Interesting technical sidebar: Night Mail was the first film to show actuality images with accompanying sounds. Ordinary life could now be heard as well as seen. The conversations of postal workers sorting mail aboard the Nightmail train had to be recreated in a studio on the set of a sorting station and recorded inside an audio truck in the parking lot. Portable gear for actuality shooting on the run was another 20 years away.

“Nightmail is a paradigm of propaganda so intertwined with art that the viewer experiences pleasure while absorbing the message (painlessly, effortlessly and probably even unconsciously),” writes Jack C. Ellis in his critical history The Documentary Idea.

Dire economic and fragile social conditions in the 1930’s and the threat of war moved Grierson to steer British documentary away from poetic towards journalistic storytelling that called attention to ‘pressing problems facing the nation.’

Grierson persuaded the British Commercial Gas Association to sponsor a film about living conditions in the industrial slums of the nation. Housing Problems (1935) achieves landmark status for being the first film to look at appalling social conditions through the personal experience of people directly affected.

From the outset Grierson wasn’t interested in essay films that explained how the world works but rather in actuality films that showed how it works.

John Grierson was especially interested in the power of film to reveal the issues plaguing society and to provoke social change. This is reflected in his first documentary, âDrifters.â[/caption]