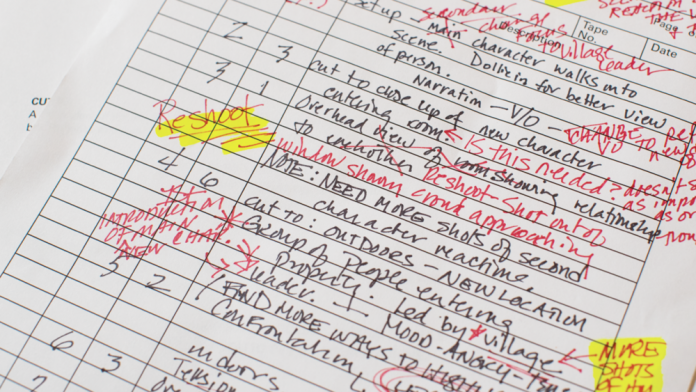 Journalistically driven documentaries produced for a broadcast window such as 60 Minutes or an epic PBS film by Ken Burns are painstakingly researched and tightly scripted before shooting begins, and the story is assembled accordingly in post-production.

In discovery mode, however, the filmmaker goes in knowing nothing. “I want to be educated,” says Australian filmmaker Scott Hicks (Glass: A Portrait of Philip in Twelve Parts – 2007; Shine – 1996). Hicks, who believes the most important research happens on the ground during shooting–meeting people and getting a sense of what’s going on– explains, “You’re really looking for the individuals who are going to help to tell that story.”

But what do you do when the story changes?

And how do you know when the story should change?

On location, you’re constantly visualizing how you will use the material in editing, how what you’re shooting will unfold on the screen. You probably have a shooting plan or a shooting script. However, says Hicks in an interview with the National Film Board of Canada, “Sometimes you find out very late in the piece that there’s a whole wealth of material over here that nobody ever told you about.”

Your doc story can take a turn in a variety of ways: One of the secondary participants in your film turns out to be charismatic and has such a riveting story to tell that she becomes the main character. Powerful and emotional footage you shot of an unplanned event or chance interaction turns out to be more persuasive and authentic than what you planned to use.

Replacing scripted footage with discovered material will send your story into a new direction and requires creative solutions to revising your story structure, the film’s beginning, middle and end.

In documentary creation most story decisions are made in editing. But what do you do when you’ve imagined your story structure, laid it down exactly the way you conceived it, but the story’s not working? It’s flat.

Alex Gibney (Taxi to the Dark Side) says this can happen when you go into editing trying to make the material fit your initial story idea. “The problem with that is that sometimes you end up using a lot of rather weak material, instead of looking at what you’ve shot and realizing, ‘Man, this is strong,’ and finding a way to include that material,” Gibney tells Sheila Curran Bernard in Documentary Storytelling.

Documentary filmmakers typically find their story in editing after hours of reviewing the footage. Not because they don’t know what to do with it but rather because the raw footage speaks louder than an edit script or a paper edit, though those are both useful story organizing tools. If you want to find the story in your doc, watch and listen.

After 16 months of shooting his hard-hitting doc Final Solution about anti-Muslim violence in India, Rakesh Sharma said he couldn’t find the story. “In the twelve-month editing process that I underwent, for the first nine months I had no idea what the film might look like,” says Sharma, who used to make well-planned, tightly scripted documentaries. Now he prefers the cinema verite approach and finds his story by spending a lot of time with his footage. “I was editing sequences, I was editing portraits (profiles), I was editing moments,” says Sharma. “Because when you live with that material day in day out, at some point it falls into a pattern and within two weeks I had the film.”

“Editing a documentary is akin to someone handing you a bag of sentences and asking you to write a book.” Travis Swartz, No Film School

Finding the story in hours of wide-ranging footage is the filmmaker’s most daunting, needle-in-the-haystack task. Documentary editors are the storytelling partners of directors. Many editors will tell you to put aside your script or your outline and to come at the story fresh. Look at the footage as if you’ve never seen it before. Don’t look at the material to see what you can cut, look at it for emotional content, for authenticity, and for aesthetically pleasing moments. Also look for footage that clearly expresses important content that’s essential to the audience’s understanding of your story.

Generally directors expect that not all of the material they shoot will be as rich as they imagine and that the story on the screen will resemble nowhere near what was written in the initial proposal. But inevitably there will be material that exceeds expectations. The filmmaker and her editing partner’s work is in the crafting of the story elements –actuality, interviews, voiceover and narration–and sculpting those pieces into a story that flows and builds to a climax, a story that the audience understands and cares about.