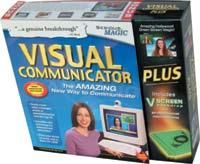 Visual Communicator Pro is automatic green screen software software. Although it was originally designed for corporate communications and video email, the DV edition is an excellent tool for any videographer who wants to record an on-camera narrator in a chromakeyed news-style setting.

Professional productions are most easily identified (in this computerized era) by the flashy graphics and overlays. With a bit of artistic talent and an understanding of compositing, alpha channels and keyframe animation, anyone can produce a network-style news show.


Visual Communicator Pro does away with the need for all of that technical knowledge. In fact, it even does away with capturing and editing. Within an hour of opening the box, we had a tightly written and edited one-minute program segment completed and most of that hour was spent writing the script. The segment looked great and was tremendously fun to record.

We opened the box, installed the green screen software and hooked up our Mini DV camcorder via a FireWire connection. On the wall of the cubicle behind us, we hung the included plastic green screen. The software walked us through a template wizard that brought a coordinated set of graphics together for our project. In the main workspace, we could see the camcorder output. We configured the green screen by ducking under the desk and clicking the Auto-Set Key button. When we sat back in our chair, the green screen was gone and a smoothly animated computer generated (CG) background was floating behind us.


To the left of the preview window, we copy-n-pasted a news story from the Web. On the right side of the workspace, we selected a program template and customized the titles and overlay text. We then dropped in two picture-in-picture effects and added some video we downloaded from a NASA Web site. After a 5-second countdown, the intro spun in (complete with music) and the prompter began rolling our text. A minute later, we had a finished news story.

Customizing the show segment was as simple as clicking on an object or effect and then replacing the template text with our own. The user interface is not flashy, but it is easy to use. There are dozens of attractive templates and presets to choose from and there are also a bunch of humorous demo files that are well worth playing with to get a feel for the program.


Each template is composed of JPEG graphical and MPEG video elements, so with enough talent and time, it is possible to create your own templates from scratch. Visual Communicator green screen software includes Alpha CG, a simple title and graphics generator. Customizing the animations of the various elements is not as easy, however.


The teleprompter scrolls up from the bottom of the screen, so the application has a vertical timeline of sorts. Graphical elements and animations scroll up with the text and synchronizing an event (say a lower-third ID) is as simple as lining it up with the sentence in the text where you want it to begin.

The green backdrop is a nice inclusion and it works fairly well, but the creases in it make it less than ideal. We explicitly did not test this product in our studio, but instead used it right in our office, under florescent lights. We evened out the green screen lighting with a couple of incandescent bulbs. You might think that this mixed-light situation would produce disastrously amateurish video, except that the resulting key and graphical elements look so professional that you might not even notice the poor lighting on the talent. The humorous and readable 114-page manual includes some good tips on getting a perfect key and even has two color swatches you can take to the hardware store or fabric shop.


The included lavalier microphone worked well enough, but recording audio through the sound card on the computer was totally inadequate. In addition to quality issues associated with the generic sound card, the roar of the computer was a problem. We used a Panasonic Mini DV camcorder in our tests and got better results using the on-camera microphone or by connecting the lav to the microphone jack on the camera.


We also found that positioning the camera was critically important. Even balanced directly on top of the monitor (or just to the side), it was obvious that most people were reading from a prompter. We discovered that placing the camera directly in front of the monitor itself was the best option. This meant that we had to move the camera when creating the project and then move it back into position to record, but this definitely produced the most natural performances.

After recording a take that we liked, we clicked the Publish button to permanently save our video. For simplicity sake, there are only a few options to choose from (including Web-friendly .asf), and we found the quality to be quite good. Of course the DV output was excellent, but any imperfections in the key were also more noticeable. The Pro package also includes Pinnacle Expression, an introductory level DVD authoring application.


While Visual Communicator is very fun and easy to use right out of the box, we found that by spending a little time setting up the lighting, and positioning the camera and microphone made a big difference. Visual Communicator will transform your relationship to video. To produce video this good, you’d normally need to create complex sets, shoot take after take, capture, edit and composite your graphics. With Visual Communicator green screen software, you’ll just sit down and have fun.

SUMMARY
Visual Communicator Pro will have you recording slick and professional head-and-shoulders narration within an hour of opening the box.