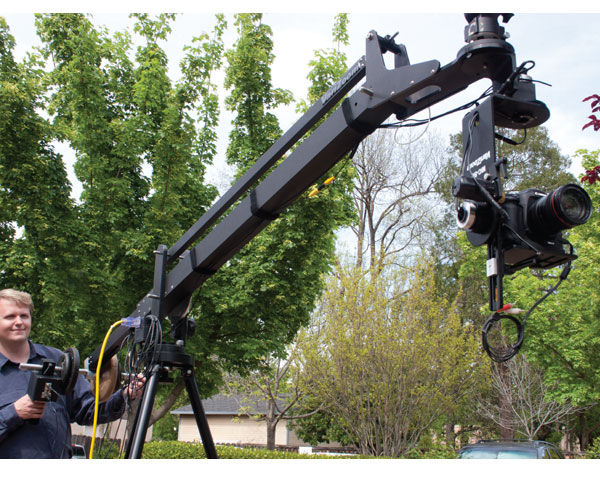 Understanding camera angles – meaning the placement and view of the camera – is something that is critically important to directors and directors of photography. A vivid understanding will ensure that your videos are vibrant and engaging.

Chances are, your eyes are somewhere between five and six feet off the ground. We’re used to seeing the world from this height – so much so, that we often forget that the camera can go anywhere else. Sometimes a different perspective, one not shot from eye level, is what your production calls for to make things interesting or to better tell your story.

Today we’re going to look at some different camera angles examples that can liven up your video and bring your work to the next level.

The shots you see the most are the old standards, the wide shots, the medium shot, the closeup and variations of those, these are the bread and butter of movie making and most of the time, these are the shots you’ll be using. There are other types of shots, more difficult to execute and that require more creativity to come up with, that are the spices that make the final product interesting and gripping.

The obvious choices for trying out different camera angles are high and low. A high camera angle can be from the vantage point from a ladder, tree, window, crane or boom – trees and windows are in fixed positions, but both cranes and booms can be rented from film and video supply houses and placed anywhere to get your camera into the sky. They also allow you to move the camera from one elevation to another, such as an establishing shot from high up that follows a car down a road and slowly descends to be level with the car door when it opens.

Small cameras are a relatively recent invention. When Orson Welles wanted to get a shot from the floor for his 1941 masterpiece Citizen Kane he had to take picks and axes to the floor, chopping a hole in the stage big enough to fit a camera, tripod, and operator. Today, it requires no effort to put a modern camcorder at shoe level, not just to show grand figures like Charles Foster Kane, but to show children or the family dog from their own eye level. 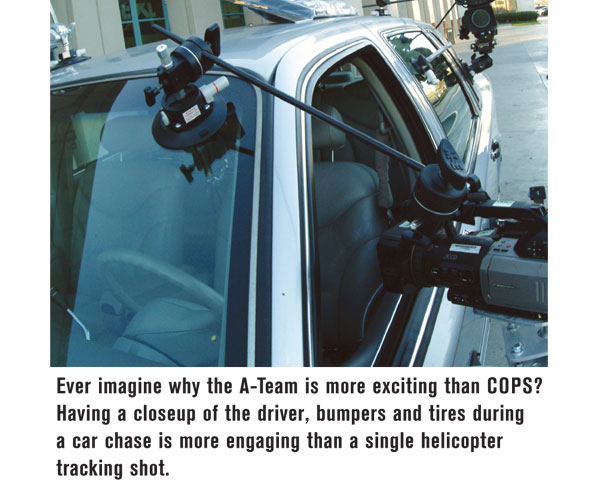 When director of photography Peter Sinclair and director David Mallet were looking to make the best concert film they could out of AC/DC‘s 1992 gig at Castle Donington, UK, shoe level wasn’t good enough – they employed 26 different cameras, including one in a helicopter and another beneath a glass floor, providing an angle from directly underneath the soles of the shoes and all. 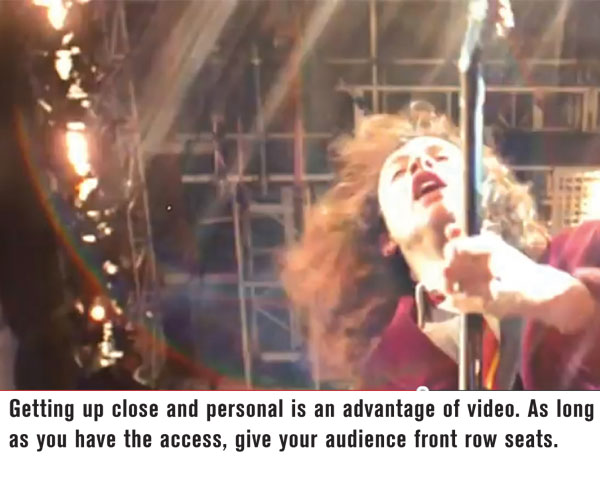 When Stanley Kubrick sought to unnerve the audience in his 1980 film The Shining, not only did he put his camera at Big Wheel level to show six-year-old Danny Torrence (very capably played by Danny Lloyd) playing in the deserted hotel, he made it into a moving shot, pushing Steadicam operator Garrett Brown around in a wheelchair to provide a dog’s-eye-view in one of the most technically memorable scenes in modern cinema.

Sometimes what moves and what stays still makes all the difference. In the 1951 musical Royal Wedding, written by Alan Jay Lerner, camera angles get up-ended in a big way when choreographer Stanley Donen has Fred Astaire dance up the walls and across the ceiling of his room while singing You’re All the World to Me. To achieve the effect, which came from an idea by Astaire himself, Donen built a room inside a giant drum, like a clothes dryer, and it was rotated by electronic motors (also not unlike a clothes dryer). The camera, mounted on the “floor”, rotated with the set, maintaining its single perspective as the set rolled over, making it seem as though Astaire was running up and down walls. The heavy-metal band Metallica reportedly spent nearly half a million dollars recreating a more industrial version this effect for the video for their 1997 duet with chanteuse Marianne Faithfull, The Memory Remains, the difference in this version had the band on steady platform which the room revolved around.

A “dolly” is, apart from something you may buy your kids, a device for moving a camera (and very often the camera operator, a focus puller and a heavy tripod) smoothly along the ground. Dollies are traditionally very heavy devices which need to move along pre-laid tracks like a miniature railroad. This sometimes required dozens of off-camera crewmembers dismantling the dolly tracks as they went, passing the pieces out of the way so that they didn’t end up in the footage.

Dolly shots used to be the only way to track people who were moving but that’s changed lately with the invention of camera steadying mounts. One of the most conspicuous, and best uses, of stabilized cameras to follow moving people is in the NBC TV show The West Wing which ran from 1999 to 2006. Detailing the lives of White House staffers, the show made excellent use of a labyrinthine set to let a camera operator precede rapidly between walking and talking cast members who seemed to spend most of their time bustling between offices being witty. The use of the Steadicam allowed the cast to roam freely without setting up a complex series of dolly tracks.

Go Where the Action is

Do you have access to a fiber optic camera? Or a helmet cam? With changes in video technology, it’s very easy to get cameras in places that was once very difficult. Not only could you attach a camera to a skateboard, you could attach one to the skateboarder’s foot. Or to a football.

One of my favorite uses of consumer equipment to produce unusual camera angles is the so-called Brooklyn Space Program, which consisted of two young boys and their father who put an HD camcorder in an insulated box, attached it to a weather balloon and sent it up to the edge of space where the balloon burst and their camera parachuted back to Earth, 30 miles from where it had launched and they located it by using the GPS in an old iPhone.

Some camera angles bring with them subtle meanings that we might not consciously be thinking of but that convey things to us nonetheless. Low angles shooting up at people convey a sense of power, inversely, shots that look down on people make them appear less powerful. Crane shots are very often used at the beginning or conclusion of a story, to bring people in and then take them out again. These sweeping aerial perspectives give a sense of the all-knowing. You find out about this story, get pulled into it and then come out knowing how it all resolves.

Putting it All Together: An Exercise in Thinking

Let’s imagine a simple scene from a script: mom yells out the window for her son who is leaving for a baseball game, but has forgotten his glove. He runs to the house, and she hands it to him. This could be very easily done with a series of medium shots, but let’s utilize some of what we’d talked about today and imagine a shot of mom from the perspective outside a third floor window with the camera on a boom. She calls out “Jimmy!” – then a shot down at Jimmy from the third floor window, he’s tiny, half a block away. Then a low shot of Jimmy, from curb level, the camera dolly’s with him as he runs down the sidewalk, a small dog runs along side him. Outside the house, a crane shot shows mom turning from the third floor window, it catches her again as she passes the second floor landing, finally coming to rest on the kitchen door as she opens it. She hands Jimmy his glove. He says “thanks mom!” and runs off – a stabilized camera following as he runs down the block to the baseball field.

Your Mission, Should you Choose to Accept it

Unlike art historians or geologists who must travel to the far-reaches of the earth to see the greatest specimens of the work that they study, you get to see all of the best examples of film and TV right on your home screen in the popcorn-riddled comfort of your own home. Next time you’re watching TV pay close attention to camera angles and shot types – are shot types in film different than camera shot types used in TV shows? What types of cinema have the most ordinary and the most extraordinary camera angles? How often are cranes and dollys used? How often is the camera high above the action, or close to the ground? Make note of these and add them to your visual vocabulary so that you can incorporate them into your own storytelling.