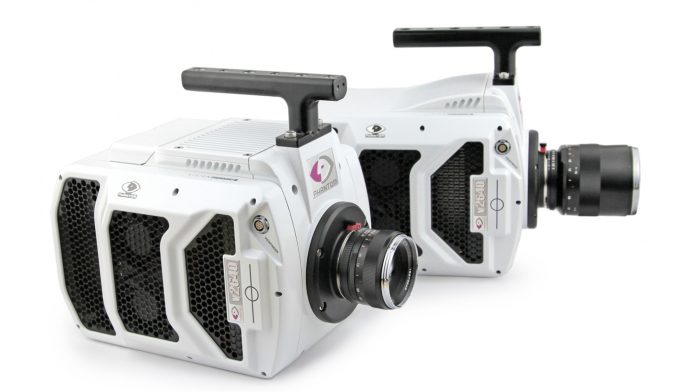 “We’re excited to bring this extremely high image quality to the high-speed camera market,” says Jay Stepleton, Vice President and General Manager of Vision Research. “In designing this new, cutting-edge sensor, we focused on capturing the best image in addition to meeting the speed and sensitivity requirements of the market. The 4-Mpx design significantly increases the information contained in an image, allowing researchers to better understand and quantify the phenomena they are observing.”

How slow can it go?

See just how much the v2640 can slow things down for yourself:

In this 720p clip shot at 17,000 fps, you can literally see the needle’s line of penetration as it passes through the water as it falls.

The v2640’s also has a high dynamic range of 64 dB and has the lowest noise floor of all the Phantom cameras (7.2 e-). This should mean for clean, high-resolution images capture on the v2640. It’s high dynamic range should also aid in capturing all the little details in high-contrast areas, and its low noise should make footage shot in dark conditions much clearer with less noise.

It’s also reported to have “exceptional light sensitivity,” according to Vision Research, featuring an ISO count of 10,000D for monochrome and 3,200D for color.

There are multiple operating modes that you can access on the v2640. Besides the standard mode, there’s a high-speed mode that provides 34% higher throughput to get to that 6,6000 fps. Monochrome cameras can also incorporate binning that will convert the v2640 into a 1-Mpx camera with the ability to capture 25,030 fps at full resolution while having a high sensitivity.

You can learn more about the Phantom v2640 at its product page.