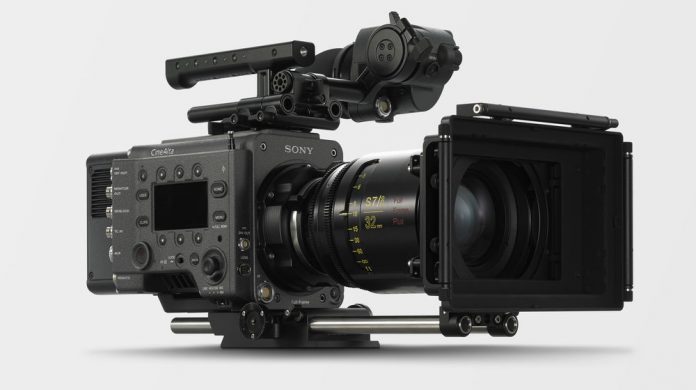 Sony Pictures has played host to any number of important events, but walking down carefully manicured paths amidst billboards advertising movies old and new brings up the fact that no movie could exist without the means to make it: the camera. So what better place to unveil the next generation of Sony’s CineAlta camera systems, the VENICE Full-Frame Motion Picture Camera?[image:blog_post:65916]
As those invited to the unveiling made their way into the LOEWS movie theater and took their seats, the excitement was palpable. As every seat was filled, Peter Crithary, Marketing Manager Professional Solutions Americas Sony Electronics, took the stage to say a few words to greet the crowd and introduce Sony notables, such as Katsunori Yamanouchi, President Professional Solutions Americas Sony Electronics. Everyone waited with high expectations for Crithary to provide details about VENICE.[image:blog_post:65915]
VENICE is a full-frame motion picture camera, offering the advantages of being compatible with a wide range of lenses, for example, Anamorphic, Super 35mm, Spherical and Full Frame PL mount. The lens mount can also be changed out to support E-mount lenses. It is aspect ratio agnostic and possesses an ultra wide color Color Palette that exceeds the BT. 2020 color space and a wide latitude of 15 stops. Add in the newly designed 36 x 24mm Full Frame Sensor and the world's’ first 8-step mechanical ND filter system — free of IR pollution and with no color shift — plus dual control displays and one can only look on in awe.
Crithary also pointed out that, while compact, VENICE is built tough, with a magnesium chassis and a cutting-edge ventilation system that is isolated from the electronics and easily accessed for fan maintenance.  Also of note is how highly modular VENICE is, sharing an established ecosystem of accessories. It features ah an interchangeable sensor block in a completely sealed design. User changeable in the field, this eliminates the need for a clean room or a trip to a service center. For viewing, a next-gen viewfinder — the DVF-EL200 — designed for VENICE has double the brightness of previous viewfinders, with a 1920 x 1080 OLED panel. [image:blog_post:65917][image:blog_post:65914]
The camera has multiple recording formats  — X-OCN, RAW, XAVC 4K and Apple ProRes HD — with post-production tools ready to take what VENICE will offer, for example Blackmagic Design’s DaVinci Resolve 14 and Adobe Premiere Pro CC. For browsing files, editing metadata, color grading and other functionality, there’s Sony’s own Catalyst Browse and Raw Viewer.
As Crithary put it, “We really went back to the drawing board for this one. It is our next-generation camera system, a ground-up development initiative encompassing a completely new image sensor. We carefully considered key aspects such as form factor, ergonomics, build quality, ease of use, a refined picture and painterly look— with a simple, established workflow. We worked in close collaboration with film industry professionals. We also considered the longer-term strategy by designing a user interchangeable sensor that is as quick and simple to swap as removing four screws, and can accommodate different shooting scenarios as the need arises.”[image:blog_post:65918][image:blog_post:65919][image:blog_post:65920]
Now it was time to see just what VENICE could do. The short film, “The Dig,” filled the screen. Seeing the first footage shot with VENICE, all were impressed with the anamorphic production, in which extremes of dark and light — from the mundane interior of a business office after dark to the harsh brightness of the desert — played across the screen with a signature high level of detail and clarity. [image:blog_post:65922]
The VENICE CineAlta digital motion picture camera system has a suggested list price of 42,000 dollars and will be available in February 2018. For further information, visit www.sony.com/VENICE