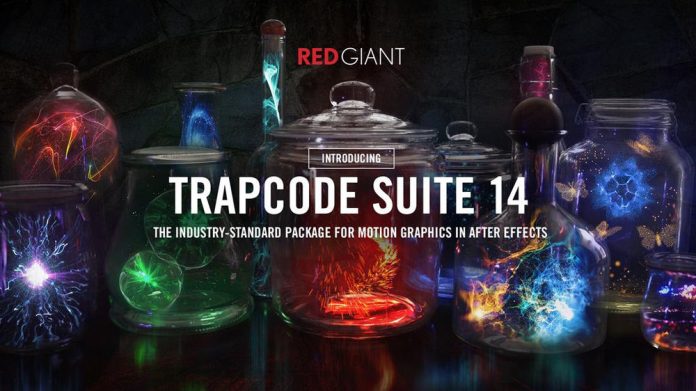 Earlier this week, Red Giant announced the availability of the latest version of their popular motion graphics and visual effects plug-in suite for Adobe After Effects, Trapcode Suite 14.
Trapcode Suite 14 includes 11 separate visual effects plug-ins designed to expand the After Effects toolset. Within the Trapcode suite, you’ll find tools for generating particles and particle grids, creating 3D animated geometries along a path and crafting 3D surfaces and wireframes. Trapcode also includes plug-ins for generating and controlling lighting effects, animating strokes and lines, manipulating text and backgrounds and creating audio-driven visual effects. New in this release are Trapcode Particular 3 and Trapcode Form 3, and Trapcode Tao has also received an update.
https://youtu.be/yzcpBHcA_rs
Trapcode Particular 3 lets you add organic-looking particle systems to your motion graphics or visual effects. This version adds GPU acceleration through OpenGL, which Red Giant says could boost speeds up to four times over the previous version. Particular 3 also includes an updated Designer tool that aims to make building effects more intuitive with instant visual feedback. In addition to a simplified building process, the overhauled Designer now brings in the composition and camera information, allowing you to more accurately preview your effects.
[image:blog_post:65362]
For even more flexibility, Particular 3 for the first time allows you to work with multiple particle systems in the same 3D space. With this feature, particle systems can interact with each other while also responding to shared parameter settings like turbulence and gravity — useful in creating complex 3D environments. In addition, OBJ files, used for 3D models, can now be used as particle emitters, and Particular 3 allows you to use any image in your composition as a 2D sprite or textured polygon. Also new in this version is an updated Aux system — for spawning child particles — and more than 210 new customizable particle system presets for effects like fire, muzzle flashes, smoke and more.
[image:blog_post:65363]
Trapcode Form 3 is used for creating 3D particle grids and particle objects that can flow and change overtime. As with Particular 3, Form 3 comes with a new Designer tool and the ability to use 3D models and animated 3D sequences as particle grids. Likewise, any image in your composition can now be used as a particle. The new version promises more control over particle parameters with a new graphing system and the ability to control color, size, opacity and dispersion as well as fractal and audio reactivity. Form 3 also adds more than 70 new customizable presets.
Though Trapcode Tao did not receive a new version in this update, it did get a new Depth of Field tool designed to make it easier to integrate Tao effects into your live action footage.
In addition to Particular 3, Form 3 and Tao, Trapcode Suite 14 come with Trapcode Mir 2, Shine 2, Lux, 3D Stroke, Echospace, Starglow, Sound Keys and Horizon, each of which fill a specific niche within visual effects design. The plug-in are available a la carte at prices ranging from 100 to 400 dollars, and the full Trapcode suite can be had for 1,000 dollars. The cost to upgrade from the previous version is 200 dollars. For more information, visit redgiant.com.