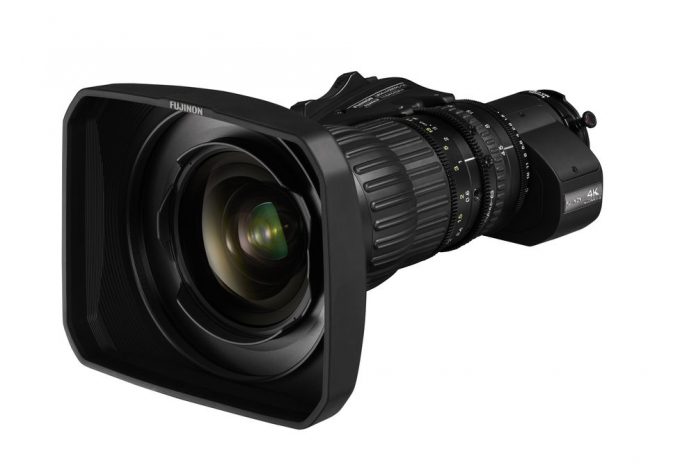 FUJIFILM's Optical Devices Division will be introducing the UA14x4.5B and UA18x5.5B during the NAB 2017 convention. The two lenses will offer edge-to-edge 4K optical quality to 2/3-inch 4K portable cameras.

The UA14x4.5B and UA18x5.5B handheld lenses are the newest additions to the UA Series and have been designed for the fields of live sports, entertainment and field production.

“The demand for 4K-compatible broadcast equipment is spreading rapidly throughout the world for live sports and entertainment,” said Tom Fletcher, Director of Sales, Optical Devices Division of FUJIFILM. “With the recent introduction of high-quality and lightweight 4K camcorders, our latest UA Series lenses will accommodate an increasing number of videographers who shoot 4K handheld.”

The UA18x5.5B’s focal length has a range from 5.5mm in wide angle to 100mm in telephoto and a zoom ratio of 18x, making this lense unique by offering both wide-angle and telephoto capability.

The US18x5.5B has been designed for easy mobility, weighing about 2.0kg, while the body of the UA14x4.5B measures only 238.5mm, allowing for up close shooting and increased depth on-location.

“The superb wide angle ability of these new lenses is a result of our latest optical simulation software, which was used to model their large diameter aspherical elements,” added Fletcher. “Meanwhile, the lenses’ multi-group zoom system suppresses image distortion and maintains the 4K UHD image quality captured is consistent and accurate from center to corner – no matter how tight or wide the shot. All combined, these new handheld zooms produce clear, vibrant and optically accurate 4K images. The UA14x and UA18x are fully-featured 4K UHD lenses that shooters can use to produce 4K UHD now.”

The UA18x and UA14x will be made available as of NAB 2017. FUJIFILM's Optical Devices Division will introduce the lense at their exhibit booth during NAB this year at the Las Vegas Convention Center.