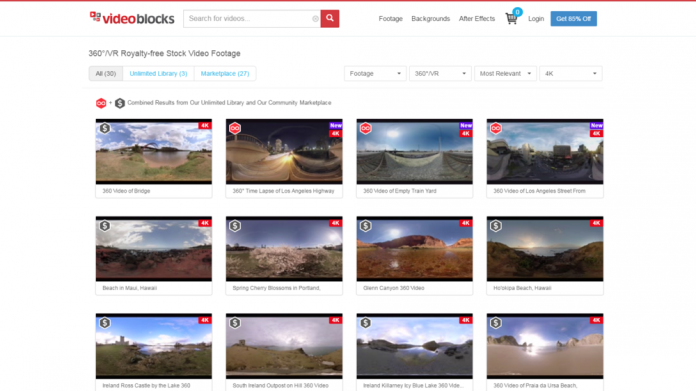 VideoBlocks today announced the addition of 2D and 3D virtual reality, 360-degree video content to their stock footage library. The new content will be available in VideoBlocks’ Unlimited Library and contributor marketplace.
The footage comes stitched together and ready to use and can be previewed in a full 360-degree sphere through a player on the VideoBlocks site.
“We’re doing with virtual reality what we did with 4K seven years ago, and we’re doing it at an affordable and fair price that benefits the entire ecosystem, on all levels,” said Joel Holland, Founder and Executive Chairman of VideoBlocks. “The stock media and video production industries are continuing to evolve every day, and with this addition, VideoBlocks continues to be at the forefront of the industry as a trusted platform for the mass creative class to explore new ways of creating, which in this case, is virtual reality.”
The new 360-degree video content comes in addition to the existing 4K and HD stock video library and is intended to provide an avenue for contributors of all capacities to upload a variety of 360-degree video, including both monoscopic and stereoscopic 3D video clips, to be sold on the VideoBlocks marketplace.
As always, contributors to the VideoBlocks marketplace  will receive 100% commission on all of the footage sold. The cost is $399 per clip for 360-degree monoscopic footage and $499 per clip for 360-degree 3D stereoscopic content.
In addition, the VideoBlocks team will add its own original 3D stereoscopic 360-degree footage for release in the unlimited library available via monthly or yearly subscription.
To jump start VideoBlocks’ launch into VR stock footage, the team is partnering with VR industry leaders Ovrture, OFFHOLLYWOOD, Atmosphaeres, DeepVR, Subvrsive and 360Labs. These partners will provide a wide variety of VR content at launch, from cities around the world, to African Wildlife and outer space. Watch a few sample clips below.
http://youtu.be/20hgJOUGYq4
http://youtu.be/6bmyQLcG_io
http://youtu.be/OnNt9oZ7fxQ
For more information, visit videoblocks.com