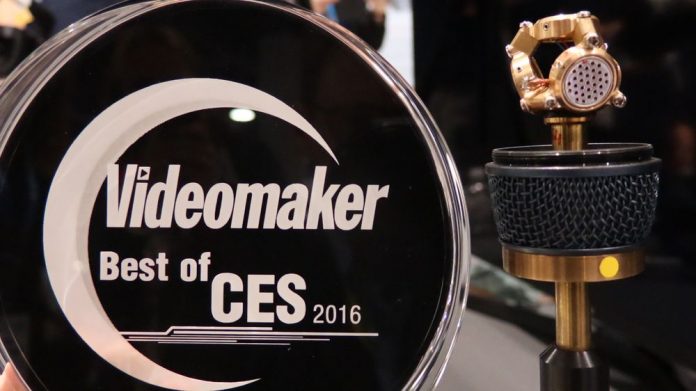 We saw quite a bit of virtual reality tech at CES this year designed for the content consumer, but surprisingly little for the content creator – even less if you remove gaming from the equation. That's why we were so excited to see the new VR Mic from Sennheiser.

The mic has four capsules arranged in such a way as to capture sound in a 360-degree sphere. Placing the mic directly below a 360-degree spherical camera will cause the mic to be virtually invisible to the viewer, yet it will capture completely immersive audio from all directions. This differs from an omnidirectional microphone because it captures four channels of sound rather than one. In their demonstration, Sennheiser featured spherical video of a piano player in a large room. When combined with a VR headset and a nice pair of headphones, we found the audio to be far more immersive than the video.

As video creators, we're used to controlling the channels sound comes from manually, whether it's stereo or 5.1 surround sound. Allowing viewers to control directionality of sound by turning their heads is a foreign concept, but one we may all need to become accustomed to eventually. So how is it done?

The entire workflow is hard to predict today, as the tools available to creators are extremely limited, but we know the first step is to use the right microphone. From there, Sennheiser expects that we will need specialized software to incorporate 3D Audio into a spherical video environment. They plan on releasing such software in 2017, shortly after the release of the VR Mic.

This is the first VR Mic we've seen, and the demo was extremely impressive. For that, the Sennheiser VR Mic is the Best Mic of CES 2016. It should come out in the third quarter of 2016. Pricing is currently unknown.