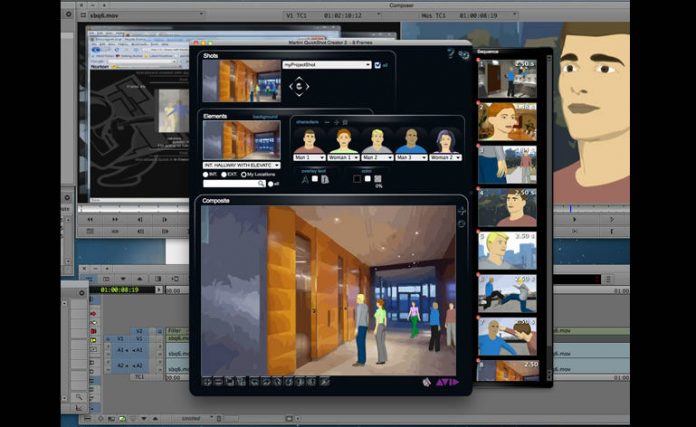 Martini is a post-production plug-in designed to bring the creativity of visualization into the video editing realm. As stated by PowerProduct Software and MacVideo Promo, the plug-in bridges the gap between the scenes not as yet shot and the final edit — eliminating the need for black slugs with text to explain a missing shot. Hundreds of pre-designed and pre-laid out shots are provided for use as they are or they can be edited in the Composite Frame. Characters come in a variety of poses (standing, sitting, running, jumping, etc.) along with phoning, point-shoot, punching, driving, typing, and lounging. Multiple characters can populate the scene, with pose changes and zoom in/out capabilities on their own unlimited layers. In addition, hundreds of pre-loaded interiors, exteriors and custom digital location photos are available for selection. Objects can be framed, cropped and saved directly into the video editing program’s timeline. The QuickShot Creator provides a visualizing of unshot sequences, with the easy-to-use interface designed to guide editors through the quick creation of composite shots.
According to Paul Clatworthy, CTO, PowerProduction Software, Martini helps editors develop missing shots using artwork from within their editing software. “With Martini, slugs better represent a plan for missing shots, and editors can create sequences that better illustrate ideas for pickups. Martini lightens the load on editors and directors and allows clients and crew to better visualize a work in progress project,” he says.
Martini supports the following video editing programs: Adobe Premiere Pro CC 2015, CC 2014, CC, CS6, CS5.5, CS5, or CS4 for Mac/Windows; Avid Media Composer v8.x, v7.x, or v6.x for Mac/Windows; Apple Final Cut Pro X, v7, or v6 for Mac; Sony Vegas Pro v13 or v12 for Windows; and Sony Movie Studio Suite for Windows.
Besides offering a 30-day free trial, the software has a limited-time price offering of $99 (a saving of over 50% of the normal $200) and can be found at here.