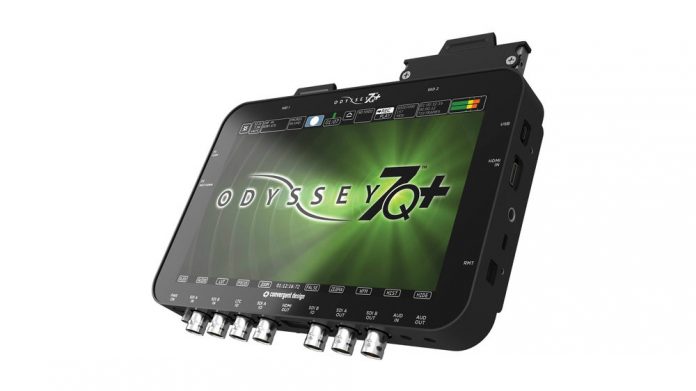 Convergent Design’s Odyssey7Q and 7Q+ now include dual-stream functionality. Two SDI signals can be viewed at the same time, or a single SDI and one HDMI, with either input selectable for recording. This dual-stream HD monitoring ability comes courtesy of a firmware update, which also adds additional functionality to the monitor-recorders. Both are now able to record 12-bit and 10-bit Apple ProRes 444 and 4444 (XQ) in HD and 2K resolutions, with video resolutions including 1080p, 1080i and 720p up to 50/59.94 and 1080p50. The cameras that support this are the Canon C300 Mark II, Canon C500, the Panasonic HPX3100 and most of Sony’s F series.
Additionally, through the use of the Odyssey Raw Bundle, 2K ProRes video can be captured by the 7Q and 7Q+ at up to 240 fps (frames per second) using Sony’s FS7 and FS700.
All Odyssey models (including the original Odyssey 7) will be updated with a new spot exposure meter, plus expanded LUT support — “new and improved” LUTs for Canon C-Log, C-Log2 and Panasonic V-Log. There is also a Timecode Window Overlay Option for SDI and HDMI outputs, and expanded Remote Trigger functions. Also Multi-Stream monitoring LUTs and a Playback sync option for Appel ProRes 50p/60p. Additionally a number of fixes and improvements to existing functions are in play. The Odyssey Raw Bundle will also see simultaneous HD video dual-stream recording capabilities in a future update, according to Convergent.
Mike Schell, President, Convergent Design, explains that the Odyssey platform was designed with a great deal of capacity and flexibility.“The ability to not only accept multiple HD video inputs but also display them at the same time is unprecedented in a small, on-camera monitor. Add to that the facility of also recording one of those HD signals in Apple ProRes and even the option of recording both signals simultaneously and it opens the possibilities for some unique applications that we are excited to share with our clients,” he says.
The firmware update’s designation number is V2015.11 and can be downloaded from the Convergent Design website.