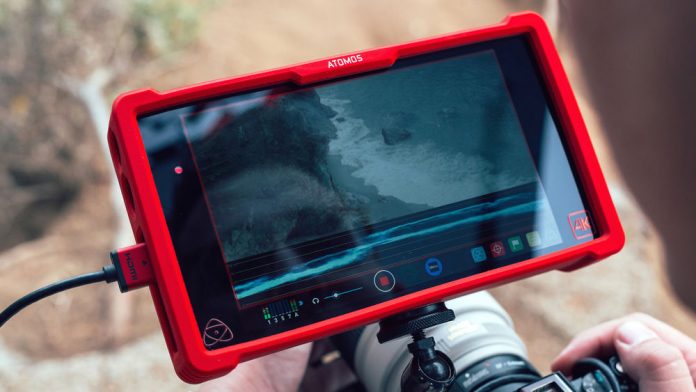 Atomos have announced their latest professional recording solution — the Ninja Assassin. The Ninja Assassin offers 4k/HD recording, 7” 1920×1080 monitoring, advanced playback and editing in a compact, lightweight and affordable add on to DSLR, mirrorless and video cameras.
The new Atomos Ninja Assassin offers the screen size, resolution and advanced recording capabilities of the premium Shogun model, but by removing the 12G/6G/3G-SDI RAW recording, in-built conversion, gunlock and balanced XLR audio connections Atomos have reduced the weight to only 430g and the MSRP to $1295.
http://vimeo.com/137906866
Via HDMI focused audio/video connections, the Ninja Assassin allows users to record in 4:2:2 10-bit formats with Atomos claiming to be the only brand to record in both ProRes and DNxHR. The Ninja Assassin is targeted at DSLM cameras such as the Sony a7s and a7RII, Canon XC-10 and Panasonic GH4 and overcomes their limitations such as compressed MPEG/h.264 recording, 4:2:0 color compression and 30 minute recording limits.
The Ninja Assassin incorporates a calibrated high resolution monitor with over 320 pixels per inch. Professional tools on-board include focus peaking, false color, zebra and waveform/vector scopes to allow for in-depth image analysis, and the Ninja Assassin’s anamorphic de-squeeze feature is the perfect companion for Panasonic’s GH4 and affordable anamorphic lenses/adaptors.
Pre-roll cache recording for up to 8 seconds in HD or 2-3 seconds in 4K helps to capture shots that might otherwise be missed, and the Ninja Assassin’s time-lapse feature offers up to 10 different sequences which can be scheduled to start and end over a 24 hour period. The Ninja Assassin enables the application of 3D LUTs to create a specific look, and the 50:50 split and LUT on/off views mean users can compare effects to make creative decisions on the fly.
The Ninja Assassin is available from today via Atomos’ extensive reseller network.