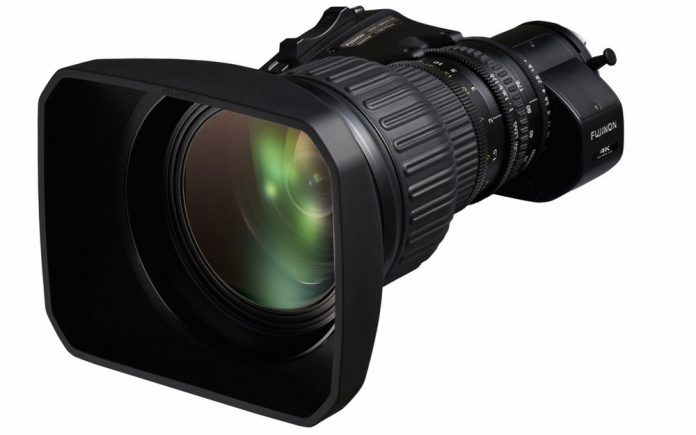 True to its announcement at NAB 2015, Fujinon Camera is now shipping the first two of their super high-end, very expensive 4K Ultra HD series of 2/3-inch lenses designed for broadcast use. The release of these lenses is just one more sign of 4K becomeing the new norm in both the creation and viewing of new contnent.
Developed specifically for 4K broadcasting, the UA22X8 portable zoom lens has a 22X zoom factor and a focal length ranging from wide angle (8mm) to telephoto (176mm). The lens employs a floating focus system for controlling multiple lens groups, depending on the shooting distance, and delivers high image quality and high contrast images from close-up to infinity. Fujinon says the lens’ versatility works well for applications such as live sports and news-gathering.
The UA80X9 field lens has a zoom factor of 80X, can cover focal points from 9mm to 720mm and is well suited for “large-scale live events” — such as shooting at concert performances or sporting events. It possesses an optical stabilization system and has a similar form factor to the existing XA99X7.5 lens
Both of these lenses have been treated with the proprietary “High Transmittance Electron Beam Coating” — a multi-layer coating designed for enhanced transmission, contrast, dynamic range and color reproduction. It is coupled with an exclusive Aspheric Technology for reducing ghost and flare and increasing light transmission. The lenses were both developed using the latest optical simulation software and come with a 16-bit servo encoder for lens data output. In addition, they can connect to other third-party systems, for example, a virtual studio system for combining computer graphic images with live action.
According to Thom Calabro, Fujinon Director of Marketing and Product Development for the Optical Division of FUJIFILM, the new 4K UHD lenses produce the same focal length range that DP’s and camera operators have come to expect with HD, in use with 4K 2/3-inch cameras. However in the case of these new lenses, the output is at a much higher resolution.