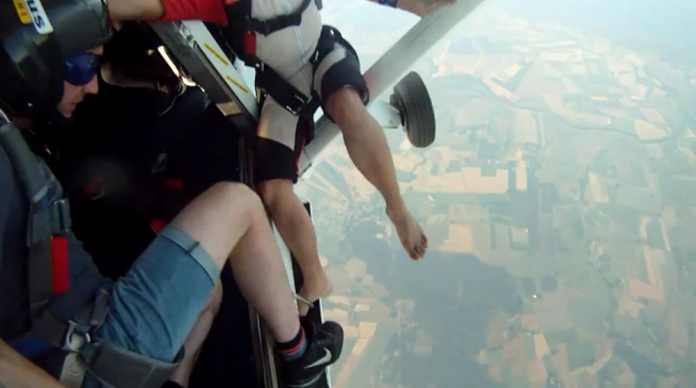 Fans and detractors of skydiving will agree that the least appealing possibility when jumping from a perfectly good aircraft is a multi-minute freefall ending in a full-speed-to-zero stop without the benefit of a parachute. Fortunately, GoPros are considerably more robust and up for more dangerous tasks than us mortals, proven most recently by a video of a GoPro letting go during freefall and spinning wildlly to Earth.

So, get this — the GoPro falls from a skydiver during a tandem dive and spins…and spins…and spins…seemingly forever, only to come to a sudden stop when finally reaching terra firma. Here's the cool part — the camera kept filming. The impact from a 10,000 foot drop doesn't stop the GoPro from recording. The camera continues to work, and the footage is captured and stored to the SD card.

Found by a resident of Kristianstad, Sweden, the video was posted online to YouTube in an effort to find the rightful owner. As it turned out, the upload did the trick, and the camera — which the resident suspected had been sitting in a meadow "for several years" — was claimed by a parachutist from a nearby flying club.

Please note: if you are prone to motion sickness, have had more than a cocktail or two today, have an unhealthy dislike for kaleidoscopes, or um…think that barefoot skydiving is ridiculous, this might not be the video for you.

Has your GoPro gotten away from you during a wild stunt? We'd love to see your craziest clips. Post a link in the comments, or hit us up on Twitter @Videomaker.