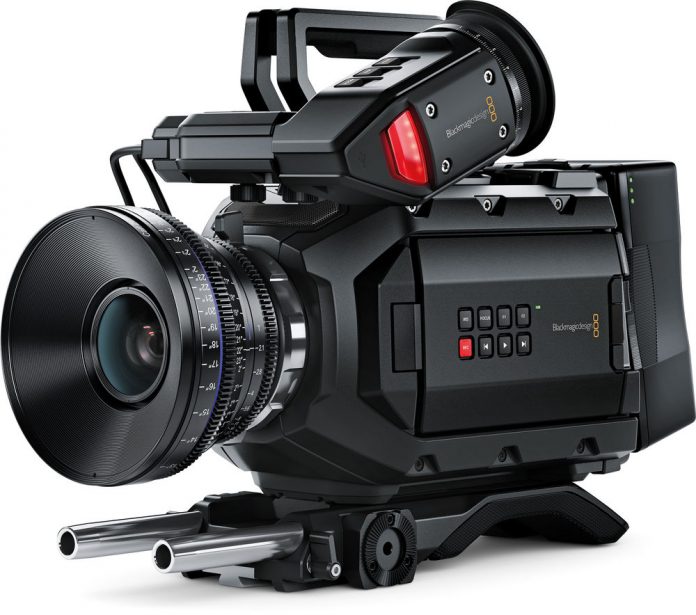 Blackmagic Design forges their own path into becoming one of the most different camera manufacturers in the market. There are three cameras we’re investigating at NAB 2015 and here’s what we have thus far.

The Blackmagic URSA has really taken off, some weight that is. The Blackmagic URSA Mini will follow it’s big brother in many ways, one of which is the four slightly varied models. The least expensive is the version we’ll focus on, with an EF mount. Another version has the PL mount for cinematic lenses, then Blackmagic Design makes 4.6K versions for both of these mounts.
At the base, the Blackmagic URSA Mini carries some hefty stats, starting with a Super 35 sensor capable of 4K or 4.6K footage. An echo from the first URSA camera is the control within the camera, you can choose to use a global or rolling shutter, and choose from 15 stops of dynamic range. To process the cinematic footage the Blackmagic URSA Mini needs to deal with the right formats, so it uses dual RAW ProRes recorders, and 12-bit lossless CinemaDNG RAW. We’ll be excited to see what sensor refrigeration does for maximizing the dynamic range. Externally, the camera allows for mounting rails, lenses and matte boxes to the magnesium alloy body, as well as standard 1/4-inch mounts on top and bottom. A flip out, 5-inch display, dual XLR audio inputs with phantom power, and dual CFast 2.0 card readers will round out the usability points. Lastly, DaVinci Resolve is included with the Blackmagic URSA Mini. The full-featured color grading software brings the price to $2,995.
For the combination of the specs and form factor, we've awarded the URSA Mini our Best Camera of NAB 2015 award.
[image:blog_post:56452]

Micro in the Studio

Next up is the Blackmagic Micro Studio Camera 4K, it’s built for maximum efficiency in studios, complete with it’s own, color corrector, talk back, tally, PTZ controls, and B4 lens control. The expansion port adds a DB-HD15 for power, and it sports the Micro Four Thirds mount. You’ll get 3840x2160p at 30fps or 1080p at 60fps, and if you plan to output to HD, the image sensor can use the extra sensor area to reduce color loss. The 6G-SDI allows remote control of the camera settings, bringing the camera control unit of television stations, a step closer and smaller. Mounting the Micro Studio Camera 4K is encouraged, and if you do, the front button will let you operate the camera. There’s plenty to be had here for $1,295.

These smaller and yet every bit robust camera options are sure to shake up many videographers, and dare we say – become game-changers.