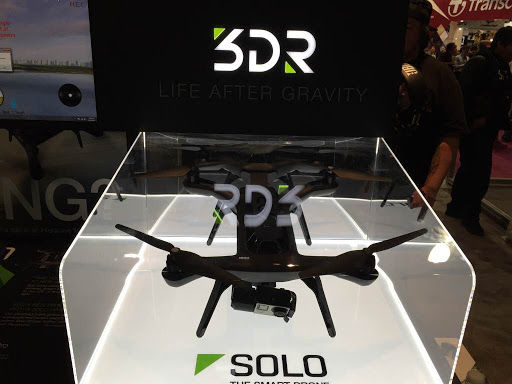 The Solo drone from 3D Robotics alters the idea of drones as radio controlled hobby model aircraft and uses video games as the inspiration. 3DR made sure the Solo allows for more focus on the imagery, and the controller shows it all, with knobs for adjusting camera angle, angle presets, and simple buttons. The team at 3DR wants to reduce the need to pilot a drone and give the feeling of gaming to flying. The Solo has preset flight patterns including a cablecam mode that imitates keyframes, allowing you to direct the camera angle while the Solo moves from a pre-determined point A and point B. It’ll even ease into and out of the move.

The Solo itself will fly a GoPro HERO camera and charge it too. The propellers are self-tightening, and in part, controlled by the 1GHz onboard computer. Solo also has safety options with lights to help show orientation, and limits, often set at 400 feet altitude and a user-defined radius.

The gaming theme continues with the ability to pause the drone. That alone is sure to save many a new user. For more enjoyment, take the HDMI out from the controller and put the video on a big screen. The Solo is setting up to be an absolute joy to fly and even more enjoyable to shoot with. For now, it’s on pre-order via retailers and is coming in around $1,000. It’s an easy pick as the Best Drone of NAB 2015.