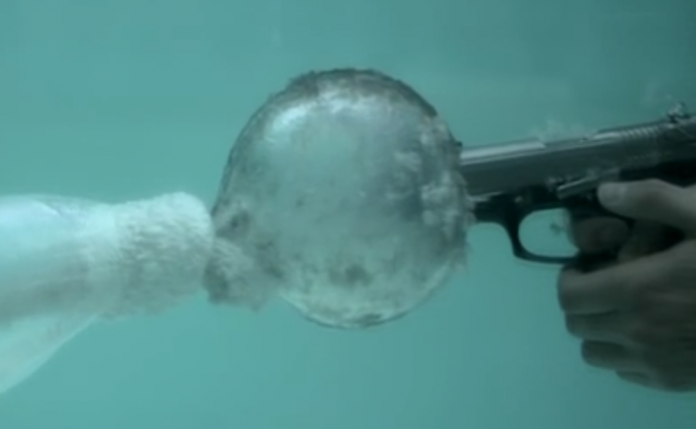 Cameras and firearms have a few things in common, at least on the surface. Both of them are tools. Both of them have a subject they are aimed at which is usually more interesting than the tool itself. And guns and cameras both shoot at impressive speeds. Those speeds vary between models in both cases, sometimes wildly.

So, we know what happens when footage from a camera shot at higher frame rates is slowed down tremendously. We achieve buttery-smooth slow motion. What happens if footage from an uncommonly fast camera is used to shoot incredibly fast gunshots and then slowed right down?

Well, there could be some interesting results. What if that gunshot footage was actually taken underwater? Sounds even more interesting.

Only problem is that it’s dangerous, expensive, loud — and did we mention dangerous — to go shooting guns and trying to film it.

Luckily, the creative online video shooters, The Slo Mo Guys, undertook capturing high powered weapons firing underwater. As the water slows the bullets tremendously, there was no risk to the swimming pool or those performing the tests.

The camera used wasn't their usual Phantom Flex, as it wouldn't be quick enough to capture a gun shot properly. For this project, the guys opted for a Phantom V1610, shooting at an astonishing 27,450 frames per second. Even though the video is about a year old, this is still brimming right around the high end of high speed cameras.

It goes without saying that this shoot was conducted by professionals in a controlled environment and should not be attempted at home.

With all of that said, check out some sweet underwater shooting:

Of course, this is an extreme example of high speed shooting, and it’s not necessary to have a $150,000 Phantom to capture cool slo mo and manipulate it. Cameras ranging from the GoPro HERO4 to many smartphones and mirrorless cameras are capable of winding up to at least a couple hundred frames a second. Plenty for a fun slo mo shoot.