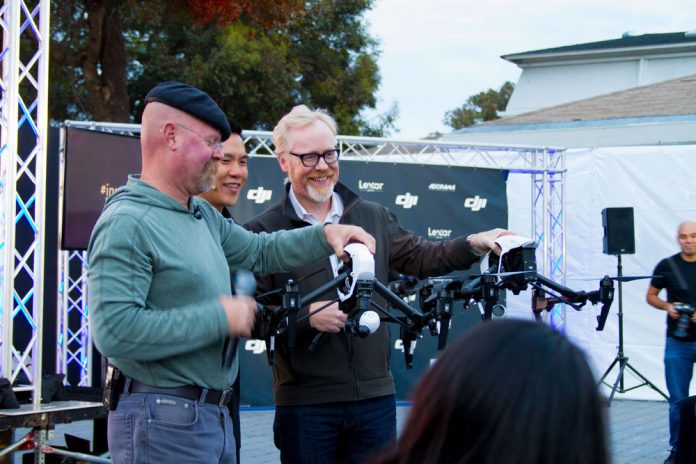 November 12th, 2014 will go down in multicopter history as the night everything changed.  DJI, the long-time leader in multicopter technology announced its new Inspire 1, completely shattering conventional multicopter design.

Security was tight, and invites were exclusive, but Videomaker was there!  Everyone on the tip of the spear with multicopter technology was in attendance; from Pix 4d (who makes software that will allow you to transform DJI Vision + footage into 3D models in the blink of an eye) to the Mythbusters (Adam Savage, and Jaime Hyneman).

You may have seen some of the teaser ads out there on the Inspire 1, or even seen the leaked patent designs, but still, seeing the new Inspire 1 appear from over the stage and drop down was impressive to say the least.  Adam Savage took one look, and said, “it’s… sexy!” [image:blog_post:54761]

[image:blog_post:54721]We thought it looked like something from Robocop, so it definitely has the cool factor.  But what’s so revolutionary about the new design? And more important, what are the advantages to this new platform?

DJI has tossed aside the “pie slice” design of the Phantom series, and Spreading Wings series in favor of an H-frame design for this model.  Normally, this could cause a bit of an issue for stability with a lot of rotational torque on the struts during maneuvers.  However, when we picked it up and put pressure on these struts, they stayed solid.  What’s the advantage of an H-frame?  Usually none, but DJI has come up with an ingenious design to make the landing gear and propellers raise up during flight.  This effectively removes potential shots with landing gear creep, and erases that annoying scan-line effect you get with Phantoms when facing the sun, which is caused by Phantom propellers casting shadows across the lens of your camera.  This makes the shooting clean, much more like a Spreading Wings platform.[image:blog_post:54716]

When asked about whether the guidance system is based on A2, WK-M, or Naza technology, DJI was still tight-lipped, saying that they’ll “release that information in the near future,” leading us to believe there may be a new guidance system involved here.  There certainly is the addition of some new sensors giving more stable indoor flight.  These new sensors are a permanently ground-facing camera that tracks pixels for positional stabilization with no GPS indoors, and sonar for altitude stabilization indoors. It’s technology we first saw pop up on the Parrot AR Drone (version 1) in the mid-2000s.  It didn’t work out too well for Parrot (echoey environments and carpets could throw off the sonar pretty easily), but it’s 10 years later and knowing DJI, they’ve probably worked out all of the issues this tech had in the past.  But we won’t know for sure until we get to fly one (coming in the near future).

Sounds crazy, but this is where your jaw will drop.  The controller has a built-in Light Bridge!  If you don’t know, the DJI Light Bridge (normally ~$1300 on its own)  is a control, telemetry, and HD wireless system.  So, the controller has cables on the back for HDMI monitors, and the ability to connect to a smartphone / tablet to use as video preview and telemetry data (as well as some autonomous flight functions).  It’s also good to go for a 2 user setup in which one user controls the gimbal, the other flies the aircraft.[image:blog_post:54746]

The new controller has a high-capacity lipo rechargeable battery, and feels really solid in your hands. They’ve also made the controls extremely ergonomic and accessible during flight (and they actually make sense).  Finally, (if you decide to use it as a single operator) the tilt control is a spring-loaded knob instead of the horrible lever they had on the Phantom 2 in the past (with instant reactions from the camera… zero delay).

Before stating the price range for the Inspire 1, it should be said that this is neither a replacement for the Phantom series, nor a replacement for the Spreading Wings series.  Think of the Phantom as consumer, and the Spreading wings as high-end professional.  That makes the Inspire-1 fall squarely in the grey “prosumer” range.  It has a lot of the amazing features of the Spreading Wings series with the ease of use, smaller size, and no-assembly required packaging of the Phantoms.  With that in mind, you’re looking at the high $2000s for a single-operator version, and the $3000s for a dual-operator version.  But no worries, to upgrade later, you can just buy a second controller (as that’s the only difference) for $650.  When you consider a Phantom 2 + H33D Gimbal (~$850), Lightbridge (~$1,300), GoPro Hero 4 Black (~$500) – totaling around $2,650 for similar, but not as nice capabilities, this is actually a steal of a price point.

DJI also announced it’s new Software Developer Kit (SDK).  There are 2 levels to this program.  At level 1, you’ll still have access to all of the modules having to do with the aircraft, but they’re more in a “widget” form.  You can develop a front-end application that utilizes the DJI widgets to do everything from control your flight paths, to utilizing your gimbal.

Level 2 is a bit more in-depth.  With this, you get full access to the DJI variables including motor speed, efficiency, GPS raw data, etc.  Needless to say, there is a strict application process for Level 2 as you could really cause some havoc with a DJI system by inadvertently telling the drone to do something it shouldn’t.  [image:blog_post:54741]

Companies like Pix 4D are using this SDK to develop things from aerial mapping to generating 3D models for animation/architectural software (fully texture mapped using the video from a Vision +), to agricultural inspection.  It’s certainly an exciting time to see multicopter applications growing!

It’s definitely an exciting time for DJI, and things look great on the horizon.  Stay tuned as new announcements about the Inspire 1 come out, and we get a chance to review this amazing new machine.[image:blog_post:54731]

Watch the public part of the Inspire 1 event on Treasure Island below.