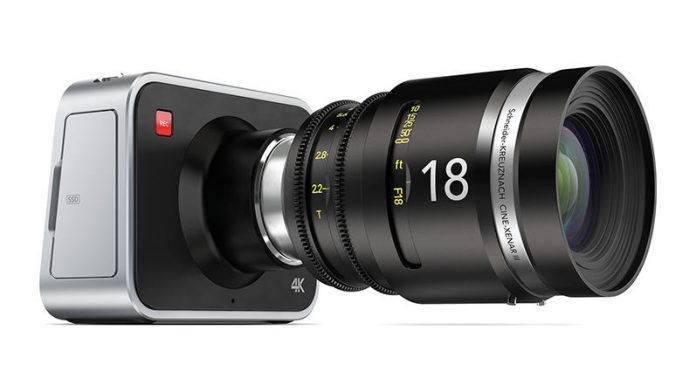 The Blackmagic Production Camera 4k shoots video at the Ultra HD resolution of 3840×2160. Files are recoded in the ProRes 422(HQ) format to a built in SSD recorder. The ProRes format makes the files ideal for holding up to extensive post-production workflows while maintaining a reasonable file size.  An added bonus for videographers who purchase the Blackmagic Production Camera 4K is that  a full version of DaVinci Resolve is included with the camera. This gives the owner the ability to perform full professional level color grading to their footage.The new Blackmagic Design camera features a Super 35 sensor with an EF and ZE compatible lens mount. The camera's 5" LCD touchscreen allows the user to enter metadata, another feature the camera boasts. The camera is able to output 10-bit HD and Ultra HD footage through a 6G-SDI output. Like the Blackmagic Design Cinema Camera, the Production Camera 4K can be highly accessorized with third party products.