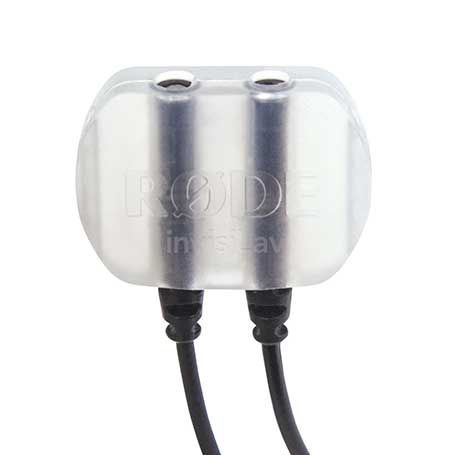 Lavalier microphones are a trusted stand-by in the gear bag of any video producer. The small size and clear vocal reproduction of a quality lav mic makes it ideal for placing on on-screen talent. In studio situations, a lav mic is most typically clipped to the talent's clothing, either on a shirt collar, a tie, or the edge of a jacket. The traditional lav clip serves its purpose well and holds the mic in place, but there are times when a producer needs to make sure that lavalier microphone remain hidden.

A common solution for the hidden lav mic, is to tape the mic to the inside of the talent's clothing. When taped to the interior of a talent's clothing, lavalier microphones can still show up on camera as the tape will create visible creases and folds in the clothing. Taping the lav mic directly to the talent's skin isn't always the best solution; let's just say that gaffe tape isn't always comfortable.

RØDE, the manufacturer of many audio products, recently brought to market a solution for hiding lavalier microphones.

The RØDE invisiLav is designed to work with the RØDE Lavalier and SmartLav lavalier microphones. It's a soft silicon sleeve that holds the mic and helps absorb handling noise caused by movement, something that's common with the use of a lav mic. The invisiLav has two mounting points, allowing for two lavalier microphones to be used simultaneously, providing an audio redundancy. It comes with pre-cut skin-safe adhesive pads. The cost of a 3-pack is approximately $18.