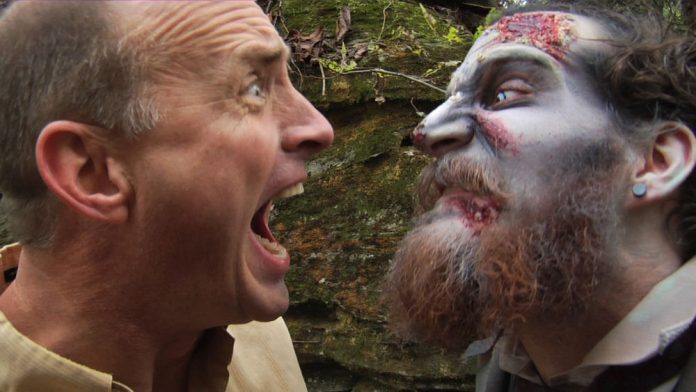 Pop culture is overrun with zombie hordes. Everywhere you turn there are zombie themed t-shirts and obstacle running events, zombie books, TV shows, and the classic zombie movies. The only way someone’s missed it is if they’re holed up in a deserted farmhouse or abandoned bunker deep in the woods, two terrible places to be when the zombies arrive. The only way to battle this craze is to shoot the zombies… with a camera.
At some point in any zombie production, there will have to be a shot of a zombie eating, it’s what they do best. A zombie’s affinity for brains is well documented, but their second favorite course needs some attention as well. They love fresh pulled intestines. This portrayal of zombie cuisine is an outdoor special effect that can be pulled off with some common items and a little Vaudeville magic.

Special effects are fun, but you don't need a Hollywood budget for many fun effects. There are many tutorials online about using liquid latex and paper towels to create fake intestines, it’s a great effect and when done correctly, looks as gory as it does good. Latex is tricky, messy, and people can be allergic to it. Here’s an alternative way to create the intestines and a simple way to make it look like they’re getting pulled out in a loud screaming panic of zombie horror. Watch our video, produced for Videomaker by Chuck Peters with Kai Vilhelmsen as the victim and Michael Oakley as the zombie, with makeup by Rosanna Nykanen and  PA is Tally Peters.

First, take some basic skin toned nylon hose and stuff it with pillow stuffing and scrunched up paper towel. Don’t overstuff it, just enough to give it some lumps and enough body to look like the victim just had their last meal. Place the new intestines in a bowl of fake blood so they’re thoroughly soaked.

Next, the victim has to be prepared. Use a piece of foam rubber to create a false body. The kind they use inside chair cushions is perfect. Use a blade to cut a hole in the middle of the pad so your zombie can reach through the foam to pull the guts through. Have your victim lay on his back in a low area on the ground, place the blood-soaked guts on his belly, then cover them with your pad and re-button the shirt. You may need to cut the back of the shirt open so it can cover the additional thickness of the guts and foam, then use careful framing and fast edits to hide the expanded girth. Don’t worry, your viewers will be looking at the blood anyways.

STEP 3: Lost in the Woods

The illusion takes place in putting all the pieces together, only to have them ripped out. Determine where the scene is going to take place, preferably along the side of a dirt road deep in the woods; zombies love to dine there. Find a ditch, a pile of wood or dig yourself a trench that is approximately the same size as the victim while they are laying down. The talent then lays down in the trench with their head, arms and shoulders out at one end.

At this point, it should look like there is a helpless victim laying on the ground with a mortal wound in their abdomen. They can scream and flail their arms but their stomach wound makes running useless. The scene can be shot with a zombie, or even a horde of zombies crawling over the agonizing victim. One undead hand scoops into the victim’s belly will result in a zombie feast. A great way to sell this shot is to back light it with a practical light in the scene. If it’s a night time scene, the headlights of a car behind the victim will help to hide the fact that this is an “on the cheap” horror effect. Likewise, a dark night scene, tinted blue will mask much of the artificial work and help set the frightful mood.

Halloween is a great time of year for filmmakers who wants to play around with their inner nightmares. There are zombies among us, most notably on the screen, and sometimes parked out on the couch in front of it.

Chuck Peters is an Emmy award winning writer and producer.