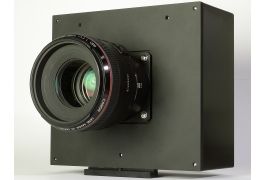 If you crave pristine low-light footage, Canon is giving us a sneak preview of a bright future (pun intended) for shooters everywhere.

Back in March Canon announced that they had developed a “high sensitivity” 35mm full-frame CMOS sensor built for one purpose, shooting video.  The sensor features pixels measuring 19 microns square in size.  While this may not sound very large, it’s actually more than 7.5-times the surface area of the pixels on the CMOS sensor you’ll find in the top-of-the-line EOS-1D X and other digital SLR cameras. In addition, the sensor's pixels and readout circuitry employ new technologies that reduce noise, which tends to increase as pixel size increases. Utilizing these technologies, the sensor makes it possible to shoot clearly visible video in dimly lit environments with as little as 0.03 lux of illumination (about the brightness of a crescent moon). This initial announcement was accompanied by some pretty impressive comparison tests.

Using no artificial lighting and shooting after sunset amid the island's mountains. Canon (In cooperation with ZERO CORPORATION) succeeded in capturing color video at 30 frames per second, in the ridiculously dark shooting environment of less than 0.01 lux.  Even your naked eye would have difficulty making out the detail they captured. The CMOS sensor was able to capture not only the color of the light emitted by the fireflies (each of which measures only a few millimeters in length) and their movements, but also the surrounding vegetation in which the species lives.

With all the hype about manufacturers bringing us higher definition images and greater dynamic range, it’s good to know that the innovation surely won’t stop there.