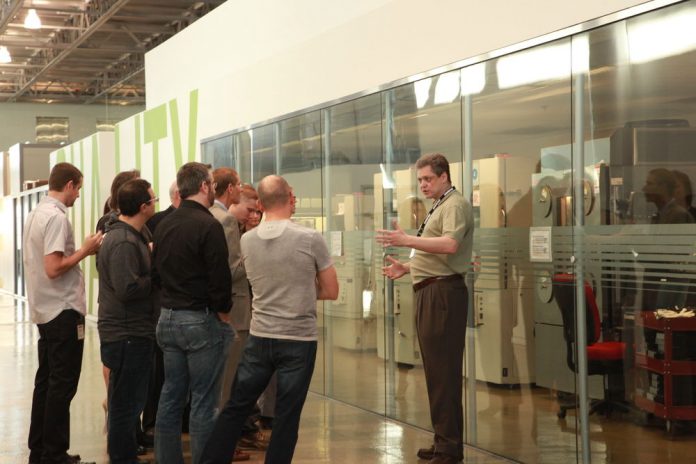 Though my day-to-day responsibilities are mainly video production related tasks, I also get to wear a journalist hat from time to time.  This mainly involves evaluating new products, writing about video production, and every once in awhile, I’m lucky enough to get a peek behind the scenes of a company.  When I say a peek, it really doesn’t do it justice.  Essentially I was treated to a behind the scenes tour of the Shure headquarters in Niles, Illinois.  It’s easy to drink the kool-aid when a company is so genuinely nice and accommodating,  but once the initial awe factor wears off, you truly get a feel for the company and the way they design products and do business.  Suffice to say, I will never pick up a microphone again and take it for granted.  More specifically, when I pick up a Shure mic, I will appreciate how much hard work, research, testing, and downright abuse they put these mics through to make sure (no pun intended) that it works well, and can easily withstand the rigors of video production.

As far as sound quality goes, Shure has a matching pair of anechoic chambers (which means there’s no echo in these rooms) which allows extensive testing of frequency and polar response of every mic.  I was lucky enough to step into one of these contraptions, and I honestly never realized just how much echo and reverberation I have heard my entire life until that moment. They also have a studio built to mimic a live sound scenario for real world testing, with live human beings to listen and grade the results.  As they put it, it’s not all about numbers and charts. When it comes to wireless, there’s a special RF chamber that blocks external signals (no cell reception in there!) for extensive testing of their wireless mics

Everything Shure makes goes through a litany of abuse that simulates real world production scenarios including hot storage, cold storage, humidity, salt fog (important if you work on the coast!), perspiration (yes, they have specially designed sweat!) and more. Of course I can’t neglect to mention the drop tests. (Both a straight drop and a mic stand drop) All of these tests are designed to make certain (notice, didn’t use the sure pun again) that your mic will work when you pull it out of your gear bag.  This seems like it would be enough, but they’re not satisfied until they test the mic to it’s breaking point.  The HALT test (highly accelerated life test) puts the mic on a vibrating platform, heats the mic to extreme temperatures, and then quickly cools the temperature to below freezing.  They continue this abuse until something finally breaks.  They’ve literally had mics with melting plastic exteriors that still worked!  Shure has a rich history of designing to MIL standard (military), and rather than lowering those standards for their consumer products, they keep the bar high.  This basically means that Shure mics are literally built for battle.

One of the more recent products we tested from Shure was the VP89. This modular shotgun mic is a versatile tool that could make any video producer drool.  This tour gave us a hands-on look at a couple new products.  In fact the VP83F LensHopper won a Videomaker Spotlight Award at NAB this year.  We’re getting our hands on one of these soon for a proper review.  The other “not even close to within my budget” gear they showed us was their Axient System. This was an amazing setup that blew my mind, but was total overkill for a simple video producer like myself.  Still, it’s neat to see what the big boys use when failure isn’t an option.

With small budget video production, we’re always trying to get more for less.  It’s easy to stare at two products and wonder, why does brand X cost less?  It’s tempting to save a buck or two in the short term and take the risk.  But brands like Shure are reputable for a reason.  They have a history of delivering what they promise, and take steps far beyond what I ever dreamed to deliver quality and ruggedness that lasts.