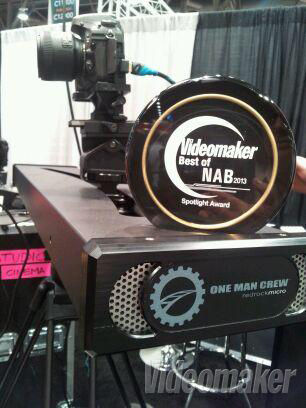 Videomaker awards an NAB 2013 Spotlight Award to Redrock Micro for the One Man Crew.

The One Man Crew is a motorized parabolic slider. The movement is what you'd expect from a slider, except the parabolic motion allows your focus to remain much more accurate – there's one person's job. The smooth customizable movement is another job that you might not have someone for. Having a slider that is easy to pack away for travel is simply unbeatable for a one man crew. Redrock Micro thought a lot through with this one with easing in and out while the One Man Crew changes direction, and if the lasers for keeping an accurate distance don't get you excited, then we don't know what will. The distance of six feet is the recommended distance for a subject, and all that remains is your selected speed. As for setup, a standard tripod will do since it comes with a 1/4-inch-20 and 3/8-inch-16 cheeseplate and has a camera capacity of 20lb. Then for $1,495 they toss the One Man Crew into a case and will be shipping these by July 2013.