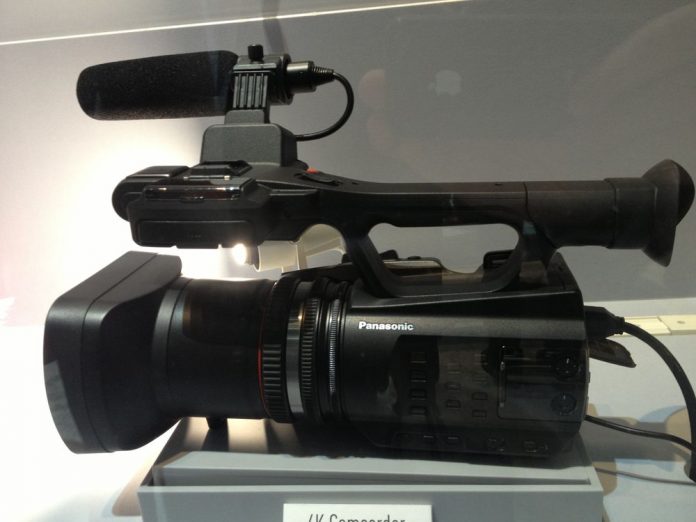 [Update] The Videomaker team in Las Vegas has captured a photo of a 4k camcorder, this is clearly not ready for shipping, but it follows the design of many other Panasonic prosumer cameras. The protype includes notes of having resolutions at 4096×2160 and 3840×2160 and one HDMI output as well as connectivity with a 20-inch 4k Display, complete with circuitry in the shape of a heart. We'll be even more excited to have it in person.

Panasonic looks to leverage what they've done well in the past. The HC-X920 takes the HC-X900 up a notch with an image leveling sensor, built-in Wi-Fi, and 20.4 megapixel still photos. It reprises the manual ring around the lens which we are big fans of, and while manual control is nearly always our mantra, Panasonic looks to make image stabilization automatic and enhanced with with Level Gauge which does vertical and horizontal axis corrections to fix minor tilts to make such human error difficult to see. An interesting application is the Panasonic Image App which can let a smartphone or tablet function as a remote audio record monitor as well as a viewfinder.
Let's not forget the rest of Panasonic's offerings, HC-V720, HC-V520, HC-V210, and HC-V110. These should meet your standards of 1080 HD video recording and compliment it with extreme optical zoom levels up to 50x. Each of these cameras uses a Backside Illumination sensor to reduce noise for recorded images.
Videomaker will also look for the HX-WA3 which is the newer cousin to the HX-WA2. The WA3 may dive as deep as 16 feet, take on freezing temperatures and of course the ever-harsh – dust. Of course all this durability doesn't help much if you can't use it, and at 1920×1080 the video should be up to par. If you like adding filters right away the WA3 has nine and is compatible with Eye-Fi's connected cards.