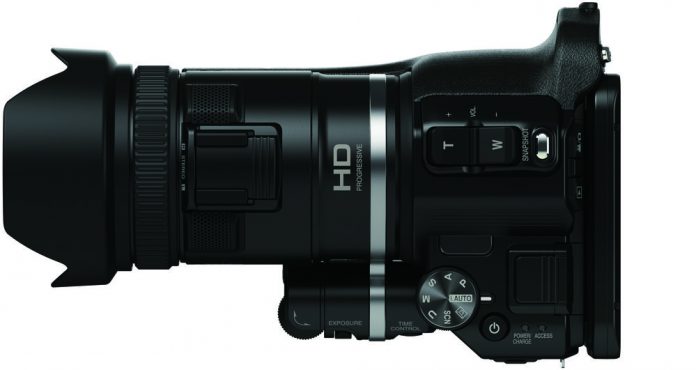 The JVC GC-PX100 goes for speed with a fast F1.2 lens and 36Mb/s bit rate. The camera's five shooting speeds are from 120 to 600 frames per second, selectable with an external dial. The high bit rate progressive recording is designed towards getting slow-motion video and JVC incorporates optical image stabilization and specialized apps to make this camera really work well with fast-moving action. If you like switching between closeups, medium and wide shots, give the Zoom Position Memory a test, it will allow for quickly changing from being fully wide, fully zoomed in and a user-defined in between. Ultimately the camera acts like a DSLR in both its form and with a 3-inch tiltable LCD. It also has a 1/2.3-inch back-illuminated CMOS sensor making 1920×1080 60p video possible. Still shots can be captured in bursts, as many as 60 in a second or as a variable time-lapse.

The JVC CAM Coach app is intended for coaches and sports use, but making annotations on clips has long been a staple in video production, the whole app, except for perhaps a scoring tally can be used outside of sports video. The app is free but the GC-PX10's newer, bigger, relative, the GC-PX100, will be $1,000 when JVC will ship it in March.  Check out our hands-on look video for more.