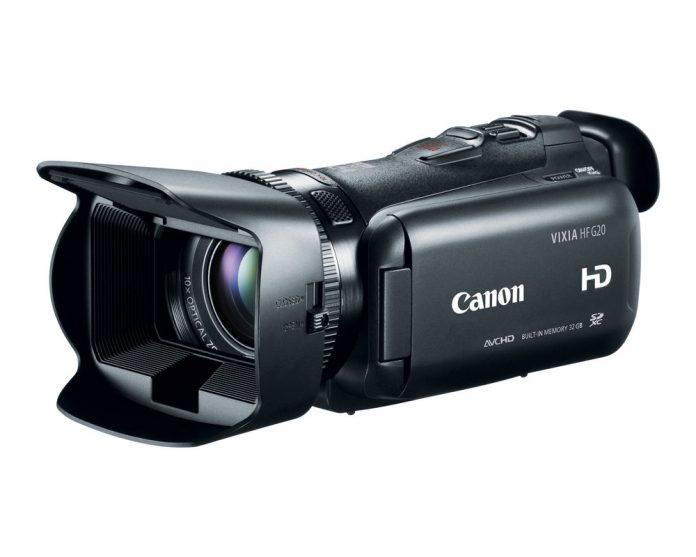 Canon showcases four VIXIA cameras including the HF G20 with exceptional video capability. The G20 holds a CMOS PRO Image sensor and combines with a DIGIC DV III image processor to increase low-light performance (20 percent better compared to the HF G10). The hardware makes the G20 capable of face detection, Touch & Track, Cinema-Look filters and of course 1920×1080 recording. You'll find a dedicated manual focus ring as well as 10x optical zoom, and 32GB internal memory supported by dual SD card slots. Our initial look into this very professional feature shows that the internal memory is the default recording function, not the two 32GB SDXC card slots. The G20 should be available in February and breaks the thousand dollar mark at $1,100, so if you're interested in a camera at less than half that price, let's delve into the  HF R42.

Many features could be repeated with Canon's R42, one notable one is simultaneous record in MP4 and AVCHD. It can hit full HD resolution at 60p. There is both a len-shift and intelligent image stabilizing system to reduce camera shake and these will be further tested with the extreme zoom levels at 32x optical and 53x digital. To manage your video you get a three-inch touch LCD screen or a 260,000-dot widescreen viewfinder. The R42 is scheduled to be available in March for $500.

Canon has sub-$500 camcorders in the HF R40 ($400) and HF R400 ($300) and both do feature WiFi connectivity to both share video and stream it live. The R40 introduces a Baby Mode designed to track a baby's development and help consumers create a better baby album. One feature that really helps here and many other areas is the Pre-Record function which records three seconds before you press record, a personal favorite for those of us that don't have a photographer's timing for once in a life time events. The R400 carries many of the same features but drops the internal memory and leaves it up to SD cards. It does reprise the extended life battery pack along with audio presets for recording live music human voices and environments.

And this is all without mentioning Canon's announcements for compact digital cameras or the PowerShot N.