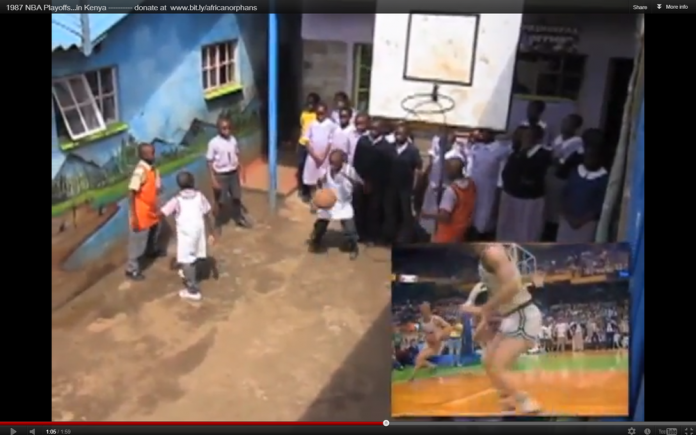 For those that love sports movies, it should be easy to relate the magic of an underdog's story. And when things are easy to relate to, people do become engaged, attentive audience members and in the case of the If You Build It, We Will Play campaign, a viewer can have an impact on whether or not the protagonist has a chance to overcome adversity. The fundraiser seeks to secure a playing space for orphans of the Grace Centre Orphanage. Sports are much more than recreation for these orphans, they are a source of confidence and are likely to have a number of positive effects. The fundraiser is being maintained by Lift the Children, a 501(c)(3) non-profit organization and concludes January 10, 2013.

The video on the 1987 NBA Playoffs in Kenya is a re-enactment of the final 10 seconds of an NBA playoff with kids from the orphanage imitating players, coaches and crowd. One of the most exciting aspects of this cause is that the kids seem to really enjoy playing their part in the re-enactment – much like American children imitate their sports heroes on a regular basis. By creating scenes from sports history, the actors and audience share a camaraderie that is best equated to that of superfans. That connection may be all that is necessary for African orphans to connect with Celtics fans. By creating such a detailed-oriented video, a fundraiser can tap into a built-in fanbase. The message is that goals, sports-related or not, can be shared by all those involved in a fundraiser and that creates one of the most rewarding situations imaginable. With only a few seconds of a radio broadcast, a single play of a memorable sports moment, and some creative re-telling, videos of sports re-enactments can make an effective fundraiser.