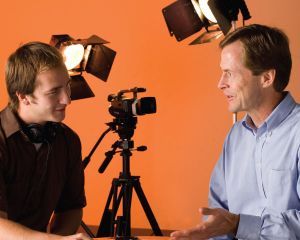 Since Videomaker has recently been looking at the keys to success in making commercials, we thought it was important to reflect on commercials just a little.  Since most of us regard commercials as little more than an annoyance that interrupts our favorite TV programs, we don't always take the time to really obsreve them.  It's only when we look back on vintage commercials that we really notice how much commercials of every era truly reflect the spirit of the times.

For example, some of the oldest commercials, starting in the 1930s and going as late as the 50s, took a very analytical approach to pitching their products.  The creative people behind these commercials tended to play it conservative, doing little experimentation with fancy camera angles or lighting.  That style made sense for the general mood of these commercials: They were mostly straight-forward explanations of the product's merits or sometimes interviews with "experts" (usually just actors) endorsing the featured product over its competitors.  Over the years, commercial makers have learned that appeals to emotion often bring better results than rational explanations.  In the years since, advertisers have moved away from explaining why a particular cleaning product gets better results and more toward suggesting that using a particular cleaning product is the key to expressing yourself as an individual.

Today's advertisers like to emphasize how one's personal identity is tied to the products one uses.  My favorite examples of this phenomenom came about during the 1990s, when advertisers tried to tap into the youth zeitgeist to portray their wares as the preferred choices of hip iconoclasts.  One great example of this was Bubbletape, a six foot strand of bubblegum wound up into a spiral.  Commercials tried to convince kids that Bubbletape was despised by various "uncool" authority figures like school principals, gym teachers and lunch ladies.  The ads were quite successful with young people at the time, who enjoyed the thought that chewing gum could make them appear rebellious.

Commercials also change substantially depending on audience and geography.  Commercials in one state may look quite different from another, and commrecials in other countries can be baffling.  When I was growing up, my parents worked for the US State Department so I grew up overseas. We moved about every two to three years and, if we were lucky, we moved someplace close to a US military place.  If there was a military base nearby, we could get the military TV channel AFN. It showed your standard mix of things that any TV channel does: sitcoms and kids' shows (usually a season or two late), local and international news, soap operas, etc. However, AFN did not show commercials. So to fill in the gaps, it instead showed informational PSAs geared toward a military audience, mostly telling you to recycle or not to eat rancid meat or to check the oil in your car.  Others were simply short factoids about American or military history or helpful reminders of your legal rights like this redubbed "Hercules" movie. Some of them were actually pretty entertaining and creative.

It makes sense that commercials would be quicker to pick up on the prevailing styles of the time, often ahead of mainstream films and television, because they needed to connect with watchers fast in order to move product.  If you're working on a commercial shoot, take some time to watch some of the commercials currently playing on television.  How are they pitching their products?  What's their message?  Chances are that they're trying to convince you that their product will change your life if you give it a chance.  What visual flourishes are they using to sell that idea?  If you can get a sense of where modern commercials are coming from, you can more effectively tap into that same mindset to create your own commercials.  Learn more about making commercials with Videomaker's commercial production video series.