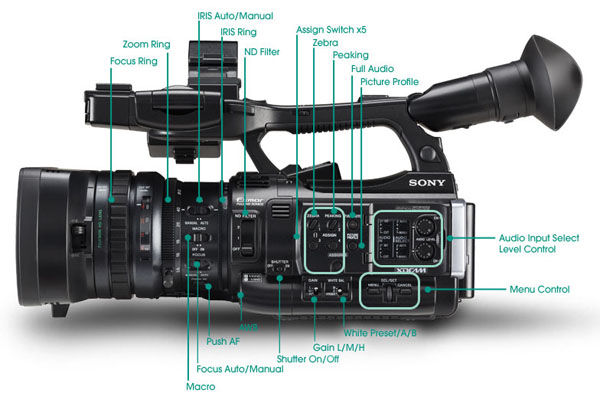 Sony announced a new XDCAM this morning with the PMW-200, featuring 3 1/2 inch CMOS sensors and 4:2:2 chroma sub-sampling. Make no mistake, this is very much a broadcast camera. The PMW-200 will shoot 30fps 1080p footage at 50Mbps, and includes a 14x zoom lens. 60fps is available in 720p. While the frame rates might not seem terribly impressive (60fps 1080p isn't unheard of at or under this price range), the real star here is the 4:2:2 color space in a small, hand held camcorder. The PMW-200 records to SD , Memory Stick, and QXD (with anadapter). Interestingly, it can also be controlled over WiFi with an iOS or Android device. The PMW-2oo is scheduled to be released in mid-September at a list price of $7,800.

FULL PRESS RELEASE
Sony's PMW-200 handheld camcorder delivers a superior HD broadcast shooting experience Basingstoke, 26 July 2012: Sony today unveiled a new addition to its market leading XDCAM HD422 line-up the PMW-200, the only handheld camcorder in its class equipped with three 1/2 -inch Exmor CMOS sensors and full HD 4:2:2 50Mbps recording. The 1/2 -inch sensors mean the camcorder performs exceptionally well even in challenging lighting conditions. The handheld PMW-200 inherits the operational versatility of the PMW-EX1R which has become the de facto camcorder for a range of productions. Designed using Sony's advanced sensor technology and decades of experience, the PMW-200 answers the industry's desire for a 4:2:2 50Mbps camcorder thatutilizesthree 1/2 -inch type sensors. With all other handheld 50Mbps camcorders on the market featuring 1/3 -inch sensors, the PMW-200 is unique in delivering outstanding full-HD resolution image quality, while providing excellent sensitivity that captures greater detail in both low light and bright environments. In addition, a variety of recording formats such as 50Mbps/35Mbps MXF, 35Mbps/25Mbps MP4 and DVCAM are available for a wide range of applications and workflows. The exceptional feature set of the PMW-200, including its 1/2 -inch sensors and 50Mbps recording capability, make this camcorder fully compliant with the latest EBU recommendations for long form broadcast production. The PMW-200 builds on the hugely successful PMW-EX1R within Sony's XDCAM family, with enhancements like MPEG HD422 recording for superior picture performance, while retaining the same ease of use and accessories as the PMW-EX1R. "With the new PMW-200, we are putting one of the most versatile handheld camcorders we've ever developed onto the market," said Bill Drummond, Strategic Marketing Manager, Professional Solutions, Sony Europe. "The PMW-200 combines exceptional picture quality, seamless HD422 50Mbps workflow and a whole host of other useful features, with an ergonomic form factor. The result for users is an agile, light-weight solution that meets their varied needs and is the perfect partner for shoulder camcorders such as the popular PMW-500. It is also the ideal A-camera in its own right for HD broadcast production." The PMW-200 also offers a powerful Slow & Quick motion function which allows capture at 1 fps to 60 fps in 720p mode, and from 1 fps to 30 fps in 1080p mode, giving users real creative flexibility. An immediate playback function enables operators to view their shots rapidly and easily, without the use of external converters or processing on non-linear editing systems. The PMW-200 is armed with a 14x zoom lens equipped with 3 independent rings for zoom, focus and iris adjustment, plus greater precision through indications of ring positions on the LCD screen. This provides users with a high level of operational comfort and control. Focusing on subjects and reviewing recorded footage is made easy with the full-colour 3.5-inch WVGA (852×480) LCD panel. The PMW-200 also comes with an invaluable 15 second cache recording feature, a function unique among handheld camcorders. It can use its internal memory to capture images, even before the recording button is pressed (maximum of 15 seconds), allowing users to record important moments that would have otherwise been missed. Genlock and timecode interfaces on the PMW-200 make it a breeze for use in multi-camera operations and entry-level HD studio applications. The camcorder also affords users greater flexibility over recording media, operating with Sony's professional SxS technology as well as other media such as SD, Memory Stick and XQD cards (adaptor required). A Wi-Fi remote control (adaptor required) for the PMW-200 enhances flexibility for studio or on-location use. The PMW-200 is the ideal solution for a wide range of applications from broadcast programme making to corporate video and event production. The PMW-200 camcorder is scheduled to be available from mid-September onwards. The Wi-Fi remote control function for the PMW-200 is scheduled to be available by December 2012 with a free firmware upgrade.