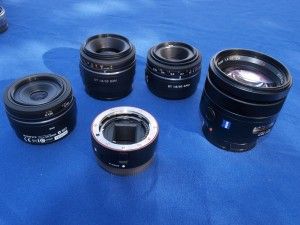 Benefits. Hands-down, the greatest benefit of DSLRs is that of interchangeable lenses, and with that, the control they can bring to the look of the video you are shooting. And by control, I dont mean just in the dazzling variety of focal lengths from super wide angle, to long telephoto that are available to achieve different film looks. I was referring to subject isolation. Look at any major film release and notice how in many scenes the subjects are visually isolated from their background. The subject is sharply in focus, while the background is blurred out. This isolation is achieved through selective depth of field with the use of faster wide aperture fixed focal length lenses, not zoom lenses. A traditional HD camcorder may have a good zoom, but its widest f.stop or aperture (typically f/5.6) cannot compete with a fixed focal length lens- typically f/1.8 or better.

Limitations. While the benefit of a large variety of lenses is tempting, there are still limitations to using DSLRs. More specifically there are three on my list: maximum record time, manual zoom control, and lack of good audio recording control. Starting with record time, you can get up to about 29 minutes at the highest 1080 resolution, depending on the DSLR manufacturer. This is a self-imposed DSLR limitation which could take another blog just to get into the reasons why! Traditional HD camcorders dont have this limitation, with record times of about 2 hours, depending on the HD record quality, and the media storage used. For example, my 1- year old Sony 3D TD10 camcorder can record over 2 hours continuously at the highest resolution on a 32GB SDHC card! The same record time can be had for all other standard HD camcorders as well. Zooming for all of us camcorder enthusiasts is a feature we take for granted. Its there when we need it, but always automatic, usually with variable control on speed. Unfortunately, when shooting with a DSLR, only manual zoom control is generally available. Many of you might be able to zoom manually, but it does take considerable practice before that zoom is smooth with no stop and start bumps. Manual audio control is a must-have feature for traditional videographers. However on many DSLRS that feature is either not available, or its got clumsy controls. Better DSLRs offer a stepped audio setting that achieves better results.If youre shopping for a DSLR, make sure its got manual audio level control.

Final Words. The evolution of DSLRs is an ongoing thing. As they continue to improve, some of their current limitations may fade away. Meanwhile, dont throw out your HD camcorder just yet.