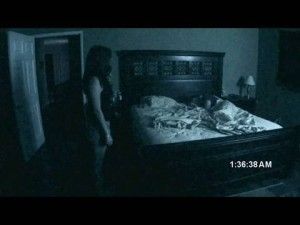 One of the most popular film genres among indie filmmakers for the last three years is found footage. The very term found footage has grown to be a divisive topic among old school film purists and the new, young talent flooding the industry regarding the legitimacy of a film that eschews the traditional hierarchy of established film crews in favor of cutting production costs to historically low funding thresholds. After all, when a film is shot using only a one man crew and two principal actors, takes place in one location, and is produced for an initial investment of $15K such as Paranormal Activity (October 16, 2009), does it belong in a theater next to films of the same genre that have been produced for 733 times more such as Saw VI (October 22, 2009, budget: $11 million) or even 1573 times more as was Zombieland (October 2, 2009, budget: $23.6 million)? (Yes, I actually did the math on those figures…)

Well in the case of Paranormal Activity, audiences responded with a resounding yes, as the film went on to gross $107,918,810 domestic for a total of $193,355,800 worldwide, and ushered in one of the most profitable horror franchises in history. Paranormal decisively beat both Zombieland and Saw VI in box office receipts by a wide margin, confounding and enraging studio suits accustomed to Hollywood system of moneymaking their predecessors worked so long to institute.The Paranormal Activity franchise has since become a mainstay of the Autumn movie going season when studios roll out their Halloween-inspired wares to fierce competition. A Paranormal film has been released every fall since 2009 including Paramount's newest entry into the canon, Paranormal Activity 4 slated to hit screens this October. Why is the Paranormal franchise such a fundamental topic to this article? Because the franchise has achieved what its ancestors failed to do: create a popular new film genre.

A Dark History Cannibal Holocaust (1980, Italy) is widely regarded as the first genuine found footage film, and is notorious for its scenes of graphic violence, sexual brutality, and the inclusion of actual footage of rainforest animals slaughtered on camera. This film was banned in a number of countries and obscenity charges were brought on the film's director, Ruggero Deodato. Cannibal Holocaust's infamy wrought a slew of imitators, most of which failed to capture the sense of realism or voyeuristic quality as Holocaust with the possible exception of Cannibal Ferox (1981, Italy). The very disturbing and realistically captured scenes of murder and sexual assault led many to believe Cannibal Holocaust was an actual snuff film, distancing the film from a large margin of the popular movie going public and forever establishing the film's legacy as one of the most disturbing films ever made. The stigma associated with found footage films left in Cannibal Holocaust's wake stifled indie filmmakers motivation to return to the genre for a number of years, but inevitably, a few brave new filmmakers took found footage to fresh creative levels with films such as the Vietnam-era mock documentary 84C MoPic (1989, USA), the satirical mockumentary Man Bites Dog (1992, France), Alien Abduction: Incident in Lake County (1998, USA), and The Last Broadcast (1998, USA). The Last Broadcast is rumored to have been produced for as little as $900, and helped establish a new low cost digital production pipeline for indie films, which has evolved into the preferred method of independent feature film production today.

The Modern Resurgence 1999 heralded the coming of what many consider to be the undisputed king of found footage films, The Blair Witch Project (USA). Shot for an estimated $60K, the film went on to gross $140,539,099 domestic for a total of $248,639,099 worldwide, and shocked audiences with its indifferent and hauntingly realistic presentation of footage captured by student filmmakers that allegedly went missing in 1994. The Artisan Entertainment marketing department went to great lengths to convince viewers that the project was indeed an authentic documentary, successfully piggybacking off of the gimmick Cannibal Holocaust invented, but to exponentially greater box office success. To this day, The Blair Witch Project retains one of the all-time highest return on investment ratios for ANY film, regardless of budget or studio affiliation. The film was followed up by a disappointing studio produced sequel, Book of Shadows: Blair Witch 2, that abandoned the found footage aesthetic in favor of a traditional third-person narrative and the project suffered dearly for it, earning a disproportionately paltry $47,737,094 worldwide off an estimated $15 million budget. Although the Blair Witch sequel was a success financially, it failed to recapture the lightning-in-a-bottle quality that helped propel the first film to such unbelievable fiscal returns, putting an end to the Blair Witch franchise (as of June 2012) and seriously stifled the mainstream movie goer's faith in the longevity of the found footage genre. The years leading up to Paranormal Activity's release in 2009 were rife with successful mainstream entries in the found footage genre, most notably the [REC] series (2007 and 2009, Spain) and its American counterpart, the Quarantine series (2008 and 2010), as well as George A. Romero's Diary of The Dead (USA, 2007), and the box office mini-blockbuster, Cloverfield (2008, USA), which earned over $170 million on a relatively small $25 million budget. The 21st century resurgence of the found footage genre coupled with enduring success of the Paranormal franchise (currently at $576.6 million combined worldwide receipts) has ushered in a veritable golden age of found footage projects, from horror (The Last Exorcism, 2010 USA, Grave Encounters, 2011 Canada, and The Devil Inside, 2012 USA), to Sci-Fi (Apollo 18, 2011 USA, and Chronicle, 2012 USA), and even comedy (Project X, 2012 USA). New filmmakers are finding innovative ways to use the genre to reinvent old fairy tales, as with the immensely clever Troll Hunter (2011, Norway), or to explore long-disputed historical events, as with the upcoming Area 51 (2012, USA), helmed by Paranormal Activity writer/director Oren Peli. Television has countered the genre popularity with series such as the Oren Peli produced The River on NBC, and Animal Planet's Lost Tapes, which presents mockumentary footage of mythical creatures such as Sasquatch and the Chupacabra.

What's the Appeal? The proliferation of the found footage genre can be attributed to one fundamental factor: cost. Found footage projects are categorically more affordable to produce than traditionally shot narratives, especially on the talent front, since the principal actors are almost always unknowns, therefore circumventing the need for big paychecks. Films are typically shot in first-person camera POV style in order to cut down on the need for qualified camera assistants, and often use available lighting sources to cut down the need for costly grip and electric personnel and equipment. Other methods of creative storytelling include the use of security camera footage, as in Paranormal Activity 2, or the expanded definition of everyday objects for use within the narrative, such as how troll hunter Hans explains that the power line towers dotting the open Norwegian landscape are actually part of a complicated troll electrical enclosure in Troll Hunter. In addition to legitimate cost cutting efforts by indie producers on found footage projects, distribution companies intentionally skew budget numbers to make us believe the found footage films that are released in theaters cost significantly less than what the films actually cost to produce (since presumably, it makes projects more of a curiosity to the mainstream theater goer, generating interest in what would otherwise be little more than a low budget film). The initial budget released for Paranormal Activity was around $15K, but the film is rumored to have actually cost more than $500K to polish and get up to theater release standards, in addition to the millions Paramount spent for their innovative Demand It marketing strategy that helped make the film a worldwide phenomenon. Monsters (2010), a UK produced sci-fi feature directed by Gareth Edwards shot in the cinma vrit style inherent to found footage films, was originally reported to also have been produced for only $15K (presumably to capitalize on the success of Paramount's decision to proclaim Paranormal Activity's $15K budget), yet Scoot McNairy, the male lead of Monsters, has publicly stated his confusion as to where such a low figure came from, and implied that the actual production budget was much closer to $500K, before marketing and release costs. Although the actual costs for these films is still impressively low compared to studio film production, this practice of downgrading a project's actual budget presents a difficult scenario for the independent filmmaker looking to acquire funding for a budget legitimately calculated under $500K, since oftentimes investors willing to fund a project of such minimal size tend to be businessmen and not filmmakers, and after doing some casual research, said investors expect the indie producer to be able to deliver a Monsters-style project for $15K. Thus, the found footage genre presents great opportunity for independent filmmakers to create a release-worthy films on a shoestring budget, but such opportunities are fleeting and extremely difficult to get right. Regardless of your opinion of whether micro-budget found footage films deserve the same audience recognition as films produced with budgets exponentially higher at the studio level, the genre will probably be around for some time. As long as studios can make money off of the comparatively cheap production costs of found footage films by bringing in audiences time and again, they'll suck the genre for everything it's got. Hopefully, we have some good films to look forward to in the future before the creative well runs dry.

Rory Walsh is an independent writer/director based in Los Angeles, CA.