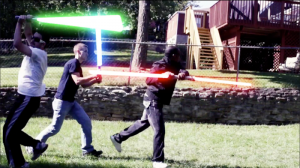 We always like to call attention to dedicated creative people who are making big things with video, who can do more with less. That's why we were so excited to see the video work of The Movie President. The Movie President is the brainchild of Kevin A. Millward, a film student at Northern Kentucky University. Kevin's movies are a great example of what indie video creators can accomplish, making great entertainment on a shoestring budget.

Like a lot of video creators, Kevin fell in love with the movies at a young age and started making movies when he was in sixth grade. His earlier films starred family members, friends and neighbors, though he sometimes had difficulty keeping his non-professional cast interested. He founded The Movie President after becoming friends with Chris Hart, another NKU student with the same passion for movie making. Together, they've created a string of short horror flicks, quirky comedies and Star Wars tributes. He's now pursuing a film school education with the intention of starting a career in movies.

"Over the last year, I have learned a lot of crucial lessons while producing short videos," says Kevin. " The most important lesson, however, is one that would seem obvious, but applies to every single shoot that I do: Anything that CAN go wrong, WILL go wrong. I've experienced everything from actors bailing at the last minute and locations becoming suddenly unavailable to extreme weather changes and cameras breaking. As cliche as this sounds, I've found the best mindset to have in this field is to hope for the best and plan for the worst." Among Kevin's most interesting videos are the "Tales of Terror," a series of short horror projects. We don't see many young video creators tackling creepy subjects, so these immediately grabbed our interest — from the story of a man trapped on a psychotic game show in "Deathtrap" to the campy cannibal feast that is "Hungry for those Good Things." "The biggest challenge in making short horror films for YouTube is the issue of keeping the content appropriate for most ages," says Kevin. "When it comes to horror, it is sometimes difficult to avoid violence, blood/gore, and disturbing dialogue.

For the most part, the videos I have made are suitable for most audiences, but occasionally I will have some negative feedback and controversy attributed to the content. The line between entertainment and offending someone is often blurred in this genre, but I am a strong believer in taking risks. If you don't put yourself out there and try new things, you won't get very far." [image:blog_post:12849]But we also wanted to call special attention to Kevin's short action comedy, "Finger Wars." You remember when you were a kid and you would pretend your finger was a gun? What if it really was? This goofy romp takes that idea to its (illogical) extreme. With quick, tight cuts to increase the tension and a frenetic action-flick soundtrack, we were really impressed at how well this video managed to straddle the line between gritty action and absurdist comedy. But what really makes it are the special effects. We've demonstrated some easy techniques for adding gunshots to your videos and you can see the results of similar special effects in this movie. The comedy wouldn't work in this case without some top notch special effects (and accompanying gun shot sound effects) to heighten the realism. Luckily, they've got plenty.

Check out the sequel to see even more finger wars — with bigger explosions! Kevin and Chris are currently in pre-production for a spoof exploitation trailer called "Priests with an Attitude". Written by Chris Hart, it's the story of two priests who take the law into their own hands as the last line of defense against the villains of a crumbling town. The pair are also at work shooting more Tales of Terror videos, a series of parody consumer reports, and possibly a prequel to "Modern Jedi: Episode II – A Dark Force." Learn more and watch some of their videos at The Movie President on YouTube. You can see more of Kevin's short films at The Movie President on YouTube. You can also find The Movie President on Twitter @MoviePresident and Facebook at www.facebook.com/themoviepresident.