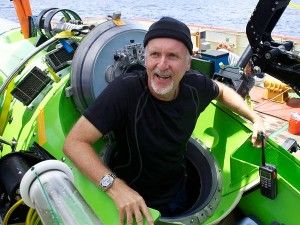 How far would you go to make a film? James Cameron returned from the Mariana Trench's Challenger Deep, known as the deepest point of the Pacific Ocean. The maximum depth reached was about 6.8mi. – the furthest ever for a solo explorer. As for what Cameron returned with from the voyage, survival for one, but also observations and 3D video of what he described as a moon-like environment. Much like you would pre-plan a shoot, National Geographic had planned on sending a lander down beforehand to bait various life forms, but an error in the Deepsea Challenger's sonar system scratched that venture and left Cameron to explore more passively.

A second, more pressing factor that cut the trip in half was a leak in the hydraulic arm which was meant to gather samples. (Kind of like going to a shoot and your mic breaks,) so with less information to gather, Cameron returned to the surface between Guam and Papua New Guinea with 3D footage andoptimism for future dives. Cameron said the differences in temperature were a stress. Going from waters at the Equator to 36-degree waters and enduring condensation in the 43-inch wide cockpit left his extremities cold and his core warm – that's quite a trade for the directors chair on a sound stage. I don't know about you, but I'm not too excited about trying to fit my 34-inch waist into a sub and record video on top of monitoring all the systems for safety and exploration.

At about 4.75mi. is the deepest living fish that's been recorded, so aside from being the first explorer to reach such depths since 1960, the amphipod shrimp-like creatures Cameron spotted may find their way onto a cinema screen. Cameron is in good shape for a 57-year-old filmmaker, and is well known for directing Avatar and Titanic (both are now in 3D), two epics with a combined 14 Academy Awards. His mental and physical stamina as well as previous dives for research on Titanic were factors in becoming one of National Geographic Society's 13 explorers-in-residence last June. It seems only logical that future trips of the same sort are in order, and it's a matter of balancing shooting for the cinemas and the documentarian responsibilities to explore on behalf of humanity.