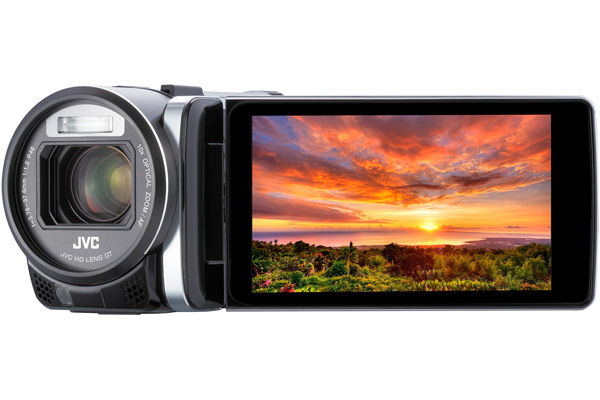 They're here and coming in full force, video cameras that bring themselves closer to the rest of your technology. Through Wi-Fi, JVC's GX1, VX700, EX250 and EX210 allow video and stills to be emailed, and files to be transferred to a smartphone. Another wireless feature allows your smartphone to be a remote control, via an app. Much like sportcams use smartphones as viewfinders, these wireless cameras incorporate devices that you already have on your person for added control of your video production.

In a similar vein with sportcams, there is also ability for JVC's Wi-Fi cameras to tag your video or photos to your GPS, thus giving you evidence of where you've taken video. When combined with live monitoring, this feature can turn your production into a miniature broadcast – videographer goes on location, sending live video back to a computer head quarters that lends viewers access (one of the three legs of the documentary storytelling stool.)

[image:blog_post:12956] All four cameras have CMOS image sensors and may record video in full HD 1920×1080 to an SD/SDHC/SDXC card, then let it be output through an included HDMI cable. High speed video is made possible with the FALCONBIRD processor. Time-lapse is an opposite function that also can make your life easier when your project demands the creation of engaging and attention-grabbing visuals. Auto face detection and a 3-inch or greater touch screen/tiltable LCD also help ensure you'll get a good moving image.

Getting stealthy with video can be a lot of fun, as well as practical for documenting performances, and this is made possible through the silent mode found on each of the models. The GX1 and VX700 both aid your camera operating abilities with an optical image stabilizer. These two models also have the larger image sensors at 1/2-inch and 1/4-inch, respectively. The EX250 may make video the most simple with its 16GB internal memory.