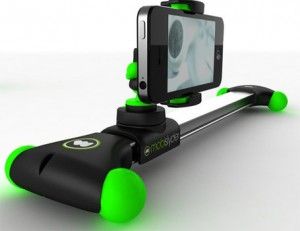 We live in an age were most every family in America owns a video camera and editing software, even if they never sought out either. Anyone with an internet connection can put their video online where it can be seen by everyone on the planet. The web has given anyone who wants it, access to far more information than any film school alone can provide. The world of video production has entered a golden age. There are no more excuses not topursuewhatever goals you hope to achieve with video.

In the late '90s, when the average middle-class American could purchase video editing software to run on the home computer they already owned, it was clear that we were entering a new era of video production. Consumer camcorders were already common, but with non-linear editors entering people's homes, so too, was a quality of production reserved only for professionals or those willing to spend thousands on uni-tasking equipment. Consumer video production stayed at that point for about 10 years, as individuals shot SD footage on their home camcorders and edited on their PC or Mac.

In the last few years, however, we've seen a surge forward in the process of consumer level video production. It's a result of computers and cameras getting cheaper, and moving into every electronic device in the home. When The Blair Witch Project came out, people were amazed that someone could shoot an entire film that would be released world wide, on a simple consumer camcorder. Today, an iPhone 4S could easily take better quality video and cost significantly less.

The only reason, I believe, that we haven't seen a nationally released film shot entirely on a smartphone yet is simply because an upgrade in picture quality and functionality can be purchased for under a thousand dollars. It's not just the cost of quality cameras and accessibility of editing software that is bringing good looking video to the masses, it's also the size. It turns out that a fluid-head tripod capable of supporting a 3lb camcorder doesn't cost a lot of money. The same can be said about slider dollies, jibs, and even stabilizers.

Of course some equipment is as pricey as it's ever been. Lights and microphones, for example, don't seem to be getting any cheaper, but we live in the age of the internet. It's much easier to learn from others about how to build your own lighting rig, or even record studio quality ADR straight into your laptop or iPad. Cameras and editing systems are getting cheaper by the day, and the free flow of information on the internet is making it easier than ever to break into video production. As a result, Hollywood is losing its hold on the film industry, which is a good thing for both consumers and producers of great video.