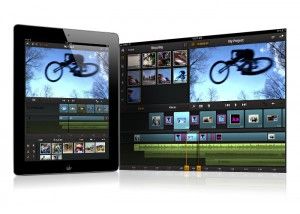 Apple has been known for being very 'i' centric with it's devices – often only allowing Mac-able applications to run on many of the products Apple sells. So we were all taken aback with the big news coming from Avid's corner that Avid Studio editing software will now run on Apple's iPad. Avid is known for Big Processing and Blockbuster Movie editing, but a few years ago they acquired Pinnacle Studio, which was an entry level editing software. Avid changed its name to Avid Studio and re-wrote its code to be more like mainstream entry level systems and more stable than it was in the past. Now Avid Studio is being released to edit on an iPad and we think the user abilities have many possibilities.

What do you think the next generation of tablet editing might accomplish? For one, anyone working on a set that involves a budget of any kind might lament the number of reshoots they might need after the fact upon discovering that a cover shot was missing, or they had to dub over a shot of a boom mic slipping into the scene, or any number of things missed until the video gets scrutinized frame-by-frame when editing. Do Overs are costly; having access to simple compilation editing software designed especially for such a portable device like an iPad or other tablet can be such a time saver.

While not employing all the full-fledge features you'd use on a workstation, a few editing techniques you'll be able to apply include the usual inserts, cuts and frame-by-frame trimming along with transitional effects like dissolves and wipes. Youll be able to make titles and PiPs [Picture-in-picture scenes] and some 3D animation. You can control audio levels and add several audio layers. And, of course, since this is geared towards tablet use, you can easily share your edited piece through Facebook and YouTube and other social sharing sites.

And of course, once you're done with the table editing, when it comes time for the Real Deal Editing, the best news for serious editors is you'll be able to export these iPad files to your P.C. for further fine-tuning. Avid Studio will have many of the features that Avid Media Composer employs, including unlimited timeline tracks and correction tools. When the iPad was first announced, video contests and festivals sprang up for the device, but for serious producers, we also saw the abilities for on-set monitoring.

Over time, applications for iPhone and iPad [along with other tablets and smartphones] were created, including timecode displays, clappers and other time-saving and pro-shooter applications like Kodak's Depth-of-Field calculator. Now a well-known professional editing software like Avid is making it's entry-level software tablet-friendly. Avid's flagship editing software – Media Composer, and high-end professional movie editing programs like Symphony would never work on a tablet – the processing needs are just too powerful, but being able to merge the files from an on-the-scene first-cut using Avid Studio to the edit bay would give the next generation of tablet editing a commanding voice. This is big news for editors from all levels: From Lone Wolf producers and documentarians to those commanding crews big and small. It's also big news in the Apple world – MacNewsWorld contacted Videomaker for our opinion.

For a limited time, Avid Studio will be available for $4.99 at the Apple App store. That's right: Avid for less than five bucks. Check it out. We've already been in contact with Avid about reviewing Avid Studio on our iPad, watch for that review coming very soon.