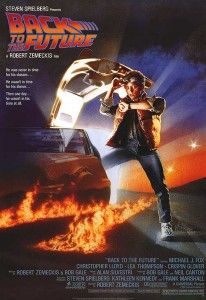 In 1985, '89 and then in 1990 , Marty McFly [Michael J. Fox] and Doc Brown [Christopher Lloyd] went back in time to 1955 then forward in time to 2015 and then farther back in time to 1885 through the 3-part Back to the Future trilogy. I'm a great fan of the trilogy, and I love to watch the entire series with the director's commentary that explains how a lot of shots were done. But a Back to the Future 4? What do you think? Should they make a sequel?

Rumors? Or Fact? Rumors of a Back to the Future 4 have been flying around for years, but as we approach Marty and Doc's 2015 'future', people are resurrecting a Back to the Future 4 idea. A couple years ago, on the 25th anniversary of the first BTTF movie, a Blu-ray edition of the trilogy was released, causing a new flurry. And no wonder, the original Back to the Future had great story-telling, good character building and people you cared about. It stood 8 weeks in the number one spot in 1985 and was the highest grossing film of that year. Plus, the sequels did equally well – a rarity in sequel-dom.

Personally, I don't think it's a good idea. Michael J. Fox is clearly no teenager anymore and has chosen not to continue an acting career, and although some rumors have stated that the BTTF4 movies would have Doc Brown with a new side-kick, I think it's a bad idea; you just don't touch a classic.

To make a sequel this late in the game will bomb at the box office, I'm sure. Remember The Sting 2? What about Staying Alive, the sequel to Saturday Night Fever? Or one of the biggest sequel jokes: Scarlett a 6-hourTV mini-series about Scarlett O'Hara and Rhett Butler following the events after Gone With The Wind. That was downright embarrassing. Help me with this – what other Sequel Flops do you recall?

Re-Makes: Love 'em or Hate 'em? Most classics should be left alone, but technological advances in the movie industry have allowed movie creators to make some amazing realistic scenes using special effects that weren't even a concept way back when. Sometimes a remake of a classic can introduce a new generation to the story, or make the story so much more realistic.

Planet of the Apes is one such re-make that come to mind. Not only did Rise of the Planet of the Apes explain how apes really could take over the world in a few generations better than the first series; the reality of the chimpanzee – Caesar – played magnificently by the amazing Andy Serkis of Gollum [Lord of the Rings] fame, was unmatched compared to humans in monkey suits of the original 1968-'70s-era series. But these well-produced remakes and sequels are rare successes. the 2001 attempt at a Planet of the Apes remake bombed.

Usually a remake or late-hour sequel seems to be someone's attempt at making a few bucks on the unsuspecting public. [Pirates of the Caribbean 4, anyone?] What sequels do you recall that were good, not just in how they were made but in how they continue the story, maybe merging storyline seamlessly?

Just for Fun Editing What I DO like, though, is watching some of the "Mash Up" trailers that many people have been making, just for fun, about what they envision Back to the Future 4 might involve. From well-produced trailers showing Marty and Doc in prehistoric times and messing with the "Time Continuum" to cheesy low-quality trailers that have mixed BTTF footage with footage from The Terminator, Juristic Park or other futuristic or prehistoric movies, these "Fake Movie Trailer" editors are having fun doing what we all love – editing.

So what do you think – Back to the Future 4 sequel? Or Hoax?

While we have the technology to make some awesome effects now, it would have to be one heck of a cast and the producing and directing needs to be spot-on, or else it'll get subjected to the same criticism of the prequels of Star Wars – The Phantom Menace, which was recently re-released in 3D – anyone see it? I did – I am, after all, a Star Wars fan, even though I didn't like how the prequels were presented – the joviality and spark from the original cast just didn't carry over to the prequels, it was too somber compared to Luke, Leia and Han's interactions.

I say: Leave the Classics alone!

Tell us, what do YOU think? And tell us, what's on your "Worst Sequel List"?