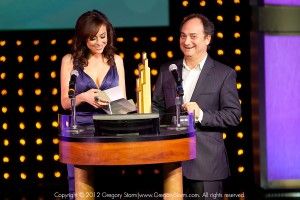 There is lots of other great content to be seen here, and what better way to find it than the best distribution platform: Blip.tv -this website brings many of the winners into one place. You’re sure to find something entertaining, and if not, at least worth sharing. There are hours to be spent watching the best hosted live web series, What’s Trending with Shira Lazar or laughing with the best comedy web series The Guild. If you like special features, the best supplemental content belongs to The Mercury Men. Mercury Men Pictures presents you with lots of extras including behind the scenes with visual effects, props, even retro trading cards. The quality of the content is unmistakably resemblant of online video.

The voting members had a tough job of sifting through such original content and coming out with decisions on 33 awards, including 9 categories for web series. Two weeks to the day, the live broadcast from Las Vegas aired on their special site, and though the broadcast appears to be a first attempt at live view into an awards ceremony… that’s what it is. The waiting time for the broadcast treated viewers to clips from many of the nominees, and during the show, what really shines are the samples of web television.The content is sometimes shocking since there are fewer guidelines for these producers to follow, so plan accordingly for things such as language and a tampon reference.

With many of the categories including series, expect audiences to expand in number and some series to land on cable networks. Next year’s IAWTV awards are sure to be even more exciting, and maybe some of our readers will join the ceremonies.