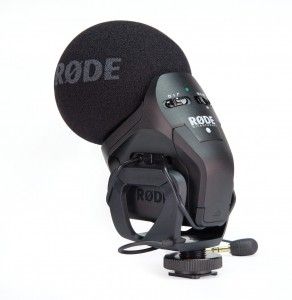 Two new mics from RDE are welcome additions for anyone shooting video on DSLRs. The VideoMic and the VideoMic Pro are very similar, and either one sounds like it will be very capable of recording good audio. In fact many of the specs like frequency range 40Hz-20,000Hz, dynamic range 114dB (per IEC651) and signal to noise ratio, 74dB SPL are exactly the same. Both have features that allow it to be used in multiple situations, high pass filters for different audio environments and 3/8-inch thread for stand or boom mounting.

The biggest differences to notice are really between these and other mics, small and designed specifically for a standard cold shoe, these mics bring warranted quality in a very mobile super-cardioid mic. Other notable differences include weight, the VideoMic is a rugged 6.2 oz, but the Pro is half that coming in at 3 oz. Also on the note of dimensions, the VideoMic extends nearly four inches longer than the Pro's 6-inch length. A windscreen is included with the VideoMic to round out the simple differences, but either way, both make use of an integrated shock mount so as to reduce the amount of unwanted vibrations or handling noise that will be recorded.

Really, the one aspect of these mics that seems like it wasn't built for your video kit is the 9V battery requirement. The pro version boasts at least 70 hours of use. The other aspect of mics this size is the lack of XLR output, the only output is via 1/8-inch, but then you wanted to use this with your DSLR anyway right? For video producers, a super cardioid is one of the most handy types of mic to have, and these two are exceptional options. Strongly consider picking one up for their versatility, portability and quality, and with a ten year warranty and reasonable cost, it is likely that the VideoMic, 249, or the VideoMic Pro, 329, will put your productions in motion.