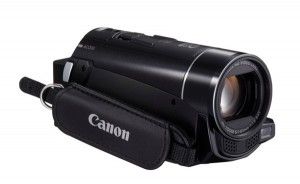 In what seems like a theme this year, Canon just announced at CES the refresh of their Vixia camcorder lineup which sports an improved CMOS sensor, MP4 recording, DLNA, and a WiFi module allowing shooters to share their content on DLNA televisions and social sharing sites. Their new lineup of camcorders called the M and R series record to 8 or 32GB of flash memory, has an improved sensor which allows better capture in low light, a anew new Intelligent Image Stablization system.

We actually got to try Canon's last image stablization version and we're quite impressed with how steady they kept the image even though the camcorder was so small in a shooter's hand. So we're really excited to see how their new image stablization performs. In addition, the camera allows dual codec recording, giving users the option to record in AVCHD and MP4 – something usually only found in higher end camcorders.

The Vixia also sports a sensor that can see as low as 1.2 lux which is also not often seen in consumer devices. The camera lineup will still keep many of the same features that led to its success in the past such as Canon's Smart AUTO mode that intelligently detects and analyzes brightness, color, an distance to select the best preset for shooting. A touch panel LCD screen where you can set focus, Cinema-Look Filters that give the image a cinematic look, and relay recording between two cards for uninterrupted video recording.

The M series will include a 10X HD video lens as well as a 3.0 inch touchscreen and has a wider dynamic range than it had before giving you more bright and dark values to work with in post. The M camcorder lineup will be available for $749.99, $649.99, and $549.99 while the R series will be available for $549.99, $449.99, and $349.99 respectively. Most of the camcorders are similar in function but have a few different features such as flash memory size that account for the difference in price.