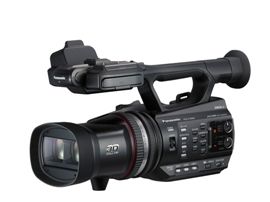 After the big announcements from Sony and Canon this year, it's no surprise that Panasonic, a leader in professional camcorders, decided to get its feet wet by announcing their own 3D camcorder – the HDC-Z10000. The camcorder does have a number of great features that should make it a solid contender in the 3D world.

First off, it has the ability to switch between 2D and 3D shooting, it records images in the 3D AVCHD format using the frame sequential method (meaning it records a full frame for each lens on the camcorder), can zoom up to 10X, and has a wide 32mm angle of view. The lenses have f-stops as low as 1.5 in order to capture great footage even in low light situations as well as two independent 3MOS sensors for each lens which should allow each eye's picture to look its best.

The great features don't stop there though. This camera also records in full 1920x1080p (which is expected) but can do so at a full 60 frames per second without any interlacing – a relief for any videographer. Like many 3D camcorders coming out on the market, the LCD display can show 3D images glasses free making it easy to see what your final result will be. However, it remains to be seen how effective their version of the technology is.

In the past, Panasonic has won over the prosumer world by having plenty of external controls on their camcorders and the Z1000 is no exception. It has a ring for focus, zoom, and iris giving it a real pro feel, and buttons for OIS, white balance, zebra bars, and many more. Panasonic also decided to include two XLR ports giving this camcorder a bigger edge than most of the camcorders being released today.

Lastly, the Z10000 also has two SD card slots with relay recording making it possible to record live events for many hours without the fear of running out of card space. This is quite the improvement over their consumer model which debuted at CES last year. With all of the amazing features this camcorder has, you're probably thinking it costs more than $5,000. If so, you might be surprised to know that Panasonic plans to sell the Z10000 for only $3500 and will be shipping in December. With a price point this good, it's easy to predict that this camcorder will likely be the prosumer choice for 3D shooting soon!