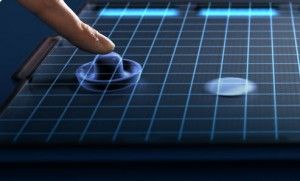 First came Smell-o-Vision, then 3D, and now this. Senseg, a tech company that makes touch technology, recently showed off a new prototype tablet screen that actually allows you to feel textures that are displayed on screen. The new technology is made possible using an electrostatic-field-based system that allows different parts of the screen to produce varying degrees of friction. Since a variance in friction is a large part of what makes up our sense of touch (besides the presence or lack of heat), your brain is fooled into thinking that the image you're seeing has texture.

The technology is applied to the screen using "tixels" or tactile pixels. They're basically an ultra-thin (10 micrometers) coating that are sandwiched between two nonconductive layers which transmit an electro-vibration stimulus. Much like a pixel, the more tixels you have on an image, the more detailed the texture sensation can be which should make it easy for consumers to know when they have a well-made texture emitting device.

As you've probably already realized, this is a definite improvement over the typical mechanical vibration or piezo solutions that other touchscreen devices offer. Not only does it let you "feel" the surface of a screen, it also does so without shaking your phone since it has no moving parts and without using much energy (typically just 1% of a phone's battery).

With the applications of this technology being so vast and with tech companies constantly looking for new technology which can help them sell more phones, it seems inevitable that we will soon be seeing this technology on phones, tablets, and touchscreen computers everywhere. For example, this technology could be used in a 3D program to help someone "feel" the texture of a 3D object or in Photoshop as a way to "feel" the surface of the paper you're painting on.

Of course, it has huge potential for filmmakers as well. Just think of how much more interactive movies could be if you could feel some of the things that are important to the story. It'll take time before we see everything come to fruition with this technology but I, for one, am looking forward to seeing what this technology can do.