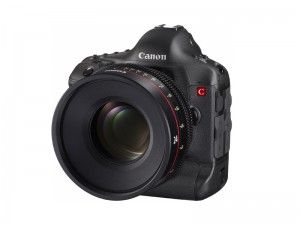 [image:blog_post:13103]In a series of huge announcements, one of video's biggest powerhouses, Canon, announced new camcorders with specs that are so good, you might just be tempted to take out a second mortgage to get one. Canon announced their new products in stylish Hollywood event. They showcased their new C300 cinema-style camcorder, brand new cinema lenses, and a mysterious DSLR-style concept camera that shoots in 4K.

The C300 was the story of the night since it marked Canon's first foray into the cinema market. It has an 8.3 megapixel sensor that delivers a full 2 megapixels of information for each color channel meaning that color reproduction should be very accurate, much like the 3 CCD sensors of cameras in the past. The C300 will also include Canon's newest DIGIC DV III image processor meaning that it will be able to handle those simultaneous feeds of color information accurately and quickly. In addition, it will record in Canon's MXF format which means you'll be getting a 4:2:2 MPEG-2 codec at 50 Mbps.

Staying true to form, they've included two slots for CF cards in the camera so that you can record on both cards simultaneously or relay-record. The C300 has a Super 35mm sensor, making it smaller than the recently announced EOS-1DX, but bigger than the sensor found in the 7 and 60D. A bit odd considering that sensor size is a big selling point for cinematographers since it typically means less noise in the image and gives the camera the ability to achieve a shallower depth of field.

Even so, there are plenty of other great features on this camera that any pro will love. To begin, the camera is modular. That means that you can take almost everything off of the unit until it becomes more or less a camera 'brain" housing just the sensor and processor. As such, it has an shoe mounted attachment that includes a 4 inch 1.23 megapixel monitor that can swivel 135 degrees horizontally and 270 degrees vertically and 2 XLR inputs with 48 volts of phantom power. The monitor also includes a waveform monitor to quickly see the overall brightness of a scene, an RGB Parade display for color saturation, a vectorscope, and an Edge Monitor Focus Assist for getting your image sharp.

The camcorder records audio in an uncompressed 16-bit PCM format at 48 kHz giving you great control in post over how your captured audio sounds. Canon also thought to include a rotatable and removable hand grip with a control dial and some function buttons in order to make the camcorder easier to hold. Of course, if you feel like giving yourself an upgrade, Red Rock Micro also just announced their new UltraCage Blue for easier camera operation.

As for inputs and outputs, the camera has almost everything you can think of. It has a Remote terminal, a Sync out (BNC), HDMI out, GenLock (BNC), Time Code (BNC), HD/SDI (BNC), Headphone, and a slot for an SD card. These inputs and outputs are what really put this camcorder into a whole other class. There are a few curious things about this camera that seem necessary to point out.

First, the camera can only shoot in 1,920×1080 HD. While this may seem more than enough for almost any application, for filmmakers this is less than robust. Many films are shown in 2K or 4K in theaters across the nation so not having the ability to utilize the full potential of the 8 megapixel sensor on the camcorder will undoubtedly keep some filmmakers from putting down money on this rig.

In addition, the camera has very few real frame rate options. It can only shoot at 24 or 30 fps in Full HD. In order to shoot at the somewhat popular 60p, you'll have to drop down into 1280×720 mode, something no filmmaker will probably ever do.

Lastly, the price is, to say the least, a bit out of the range of most professionals to just pay out of pocket. At $20,000, this camcorder will either become a popular rental, or will be bought exclusively by larger companies. It's no DSLR killer. However, it still has many other highly-sought after features that will allow Canon to give other camera companies a run for their money.

Canon also snuck in a preview for another exciting product at their Hollywood event. They showed off a new DSLR model capable of recording 4K video with a 35mm full-frame CMOS sensor at 24P with Motion-JPEG compression. There aren't many other details than that, but this is exciting news nonetheless. It means that we might soon be able to get what every 5D and 7D user has been asking Canon for: a DSLR camera that's both friendly to video and to your pocketbook as well.

Lastly, Canon announced seven new 4K EF Cinema lenses at their Hollywood event. They are a new type of lens that support 4K resolutions, have zoom, focus, and iris markings engraved on the surface, and that have very little "breathing" in the focus. They announced a CN-E30-300mm T2.95-3.7 L S lens, a CN-E14.5-60mm T2.6 L S lens, and a series of prime lenses including the CN-E24mm T1.5 L F, CN-E50mm T1.3 L F, and a CN-E85mm T1.3 L F lenses. With such large apertures, little breathing, and useful markings for accuracy, these lenses are sure to be a hit among many of today's cinematographers. The zoom lenses will go for the hefty sum of $45,000-$47,000 each while the prime lenses will be going for the much smaller sum of $6,800. Not an impulse buy by any means.

Canon will be releasing the C300 this January while the concept 4K camera is still to be announced. Their zoom lenses will be available this March with the primes coming shortly thereafter in July.