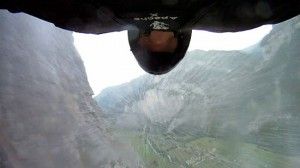 My son took the GoPro HDout the other day, mounted it under his bike seat just above the rear tire, and pointed it backward. And off he went for a quick spin around our city's park and along it's miles of bike paths and single track trails. The video he shot was pretty cool; nice views of the road or the trail, framed by the park's stately oaks, and all of it receding away from the fish-eye view of the camera.

The most visually interesting part of this mini-project was the way the bike tire nearly bisected the frame and continually provided a dramatic focal point of reference as it spun along. This was his intention and by mounting the camera so low and close to the tire, he achieved his purpose. The video he shot now awaits editing, the application of some yet-to-be created layered-on animation, and pairing it with his favorite music (most likely Green Day's Boulevard of Broken Dreams).

Once he's finished I think he'll have a very nice little video. But of course, I'm biased. But not so biased that I won't readily acknowledge that some astonishing video has been coming out of these little cameras since about 2004 and that this video obviously puts my son's bike project to shame. Anyone familiar with the GoPro brand and the hundreds of extreme sports videos available in nearly every nook and cranny of the web, knows the name Jeb Corliss.

Mr. Corliss, who seems ready, willing, able and downright eager to jump off nearly anything, is one of this genre's best assets. Who wouldn't want to make videos like this? Travel the world in search of more and more exotic film settings? Sign me up. Fly through canyons and over waterfalls without the annoyance of armrests, seat belts, or stale cabin-pressurized air? You bet. Launch your body off 6000' cliffs and skim over jagged rocks wearing nothing but a neoprene superhero-like wing suit?

Uh, well, maybe not. But watch video's of Jeb Corliss and the legion of other daredevils willing to let us be voyeurs to their adventures? Yep, all day long. Corliss and GoPro recently announced another milestone in capturing a new piece of human-to-geography interfacing (technospeak for wicked awesome stunt) when Corliss successfully wingsuited through a cave above Tianmen mountain in the Hunan Province of China. It's easy to be captivated by stunt videos. But that begs the question: what else could you do with cameras, of any make, that are uniquely suited for first-person shooting?

At the other end of the spectrum from Jeb Corliss and his cohorts leaping off tall objects in single bounds, is the much more subtle work of Robert Ladislas Derr, a performance artist whose medium of choice includes video. Derr often uses four cameras, one each pointing forward, backward, right, and left, shooting as he wanders the streets in places like Vancouver, Boston, and New York.

These unfiltered (and apparently largely unedited) video immersions into both urban and natural landscapes take first-person video to a near extreme. Robert Ladislas Derr's first-person videos are really worth checking out. What will you be shooting with your first-person camera tomorrow? While it may be unlikely that you'll ever shoot your entire project on a simple pocket or minicam, these devices certainly can provide a quick and easy way to capture first-person point-of-view footage.

See our buyer's guide for these inexpensive cameras.

For more on first person point-of-view shots and a review of the Go Pro HD Hero see our article from this past June.