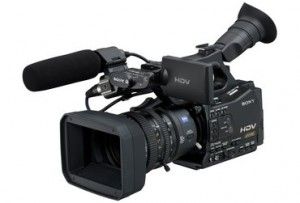 The first film I ever shot was with a Canon Hi 8mm camcorder. It was the summer of 1997 and the inspiration to do a short film hit me after a film student friend of mine directed her first film on Super 8. I spent over $3000 to produce my own short, going in with blind enthusiasm rather than general knowledge.

To make a long story short, my efforts to shoot my first short soured. I didn’t have a clue about directing not to mention video camcorders. I shot the short, nonetheless, using actors and my low-end camera. It took three weekends to complete, but I finished it. Post production became the next headache. I knew zero about nonlinear editing and could not afford to have a pro edit it for me. Therefore, the project sat in my closet for weeks until a friend, who performed in the project, wanted to see it. Reluctant at first, I finally made a VHS copy (remember those) and sent it to him. He loved it. His unexpected approval encouraged me to show it to others. And you know what? They all loved it.

Over the last decade, I began to realize somethingsomething the filmmakers of The Blair Witch Project and Paranormal Activity came to realize long before I did. As the digital video and HD age exploded onto the scene, I realized that independent filmmaking involved creativity and art over technology and expense. Real storytelling stems from “how” you use your camera and not simply from which camera you use.

First, let me point out there are several video camcorders on the market for the beginner and pro filmmakers. The top five camcorders listed on the market today are:
a) Canon XH A1S
b) Sony HDR-FX1
c) Sony HVR-Z7U
d) JVC GY-HM100U
e) Panasonic AG-HVX200 P2

Selecting the perfect camcorder depends on different situations. For example, what are you going to be shooting? What is your budget? What locations are you going to use? Does your shoot require hiring a crew? Do you want George Clooney in your project?

Films consist of 11 basic shots. Before you begin shooting, you always have to know your camera setup and movements. Some of the basic shot types are:
1- Establishing shot
2- Master shot
3- Full shot
4- shot (not used as much anymore)
5- Medium shot, which covers the:
a) Two shot
b) Over-the-shoulder shot
c) Telephone conversation
d) Reverse shot
e) Walking two shot
f) Standing two shot

When you learn filmmaking, there is no way around learning the basic shots. Directing is a visual art. Directing a filmwhether with film stock or videocomes down to creating a series of circumstances. The filmmakers of The Blair Witch Project and Paranormal Activity created accounts that allowed them to shoot with only one camera and keep a sensible budget. You can do the same.

First, if you are an aspiring filmmaker and want to direct an independent film, a documentary, or even a How-to video, you have a host of modern technology at your disposal.

I am going to confer on one: The Sony HVR-Z7U. It is the most expensive camcorder out of the top five. The Sony HVR-Z7U comes with a hefty price tag of $4,990.00. With tax, that is over five grand. It is well worth the cost. When you are looking for a camcorder on a budget, you will quickly encounter the difference between cost and features.

The Sony HVR-Z7U has its pros and cons the way most camcorders do. This is why I suggest you know what you want to shoot before you decide on what you are going to shoot. For example, let’s say you are shooting a scene that needs you to track a subject from the sidewalk and into a building. Most camcorders have problems with adjusting to the change of exposure. Higher-end camcorders like the Sony HVR-Z7U solves this problem with manual exposure control levels for a smooth transition.

There are other key features of the HVR-Z7U that budding and proven filmmakers may find useful. The most relevant and convenient of them all are interchangeable lenses. The Sony HVR camcorder comes with natural touch lens operation. You can remove the lens hood with the touch of a button. How cool is that? The big benefit here is that you can change lenses conveniently and faster between shots. Further, the camcorder’s zoom is smooth than those camcorders without interchangeable lenses. Simply put, better close-up shots.

Another useful featurethe Sony HVR camcorder comes with three ND filters. The filters handle sunlight reflection without you having to worry about overexposure or shutting the iris.

The Sony HVR microphone is another sweet package. There are two XLR inputs for audio. The built-in microphone is also easily detachable for quick storage. You can also attach an external mic, such as a shotgun mic, for better audio when shooting subjects.

Overall, if you are going to shoot a documentary or artsy indie film the better higher-end camcorders can’t be beat and the Sony HVR-Z7U comes highly recommended. It is not the cheapest camcorder on the market, but, as far as near professional camcorders go, it’s the best choice.

I recently shot a short comedy film called Pull Over which told the story of a cop on duty pulling over drunk drivers. I filmed the project similar to Reno 9-1-1, using a one-point perspective from the camera mounted on a Steadicam inside a squad car. The production cost a little over $6,000.00. But the budget wasn’t what caught the attention of the viewers. I made a short movie from a creative angle with one camera and that left them speechless. Think El Mariachi.

So, if you’re like meone out of over a million people aspiring to be creative with small revenuedon’t despair. Save, save, save and buy a quality camcorder like the Sony HVR-Z7U, and go out there and discover how to make a creative film with it. Always keep in mind, the reward comes from the results and not merely from the efforts.

Stephen Joseph is an independent filmmaker and writer.