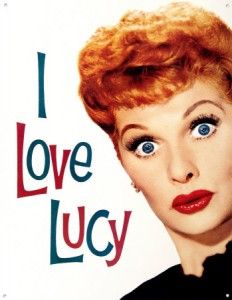 Hollywood was putting on the Ritz this month, celebrating the 100th anniversary of the birth of Lucille Ball, the amazing iconic redhead of the longest syndicated-running show on television: I Love Lucy. But Hollywood wasn’t alone, there were worldwide festivities celebrating the comedienne’s role “Lucy Ricardo“, as the I Love Lucy show moves into 60 years of making viewers laugh.

Hard to believe that “Lucy Ricardo” could be 100, or that the show is six decades old, but generations have grown up watching the program, and to us, she will forever be immortalized as the 1950s era New York housewife, married to the Cuban band leader, Ricky Ricardo.

What was “just a show” to most viewers, to we video producers it was the program that launched the technical set-up and format to TV producing that many of us follow today. I Love Lucy was the first show recorded with a live audience, and it was also the first show to use 35mm film, instead of 16mm kinescope. The 35mm film was of a much higher quality which is one of the reasons we can still find I Love Lucy in syndication.

The builders of the I Love Lucy show were also the first to design the recording studio in a classic 3-camera setup, which is the design still in use today. Other firsts included using a large muted light grid, eliminating annoying and “false” shadows, giving an even tone and more natural look to the set. It was one of the first to feature a pregnancy into a show’s storyline.

CBS, the show’s original owner, had reservations about using Lucille Ball’s real-life husband, Desi Arnaz, as a main character because he was Cuban, but Lucille Ball held strong to her demands.

Although people have heard of all the behind the scenes drama including Lucille Ball’s and Desi Arnez’s breakup, the two were quite the team, financing part of the show themselves, and were eventually able to buy the rights from CBS, creating Desilu Studios which controlled I Love Lucy and also brought many other popular shows under it’s wings including The Andy Griffith Show, The Dick Van Dyke Show, My Three Sons,Star Trek, Mission: Impossible, Family Affair, The Untouchables, I Spy, That Girl, Make Room for Daddy and more and more and more.

Lucille Ball was born August 6, 1911, and I Love Lucy premiered on CBS on October 15, 1951 a few months after her 40th birthday. The I Love Lucy show has been running almost daily – somewhere – worldwide for the past 60 years.

The former “Ziegfeld Girl” dizzy comedienne was nothing like her TV alter-ego, she was tough, driven, and financially savvy enough to be the first woman to head a major studio after she bought out her husband’s share of Desilu Studios following their divorce.

Lucy’s character was so different than what we are forced to ‘relate’ to today: plastic “Stepford Wives” clones of every-other TV no-name ‘talent’ who will fade into nothingness the first season their show is no longer on the air.

Why – of all the TV shows that have come and gone, is this one still entertaining viewers: good writing, perfect comedic timing, and castmembers that knew their roles and played them well. oh.. and it was one heck of a funny show. We should all be so lucky to produce such an iconic show that will live long after the physical TV set is no longer in every home in the world.

Just as you wouldn’t drive a car without insurance, you should also never shoot without it either. Of course, we’re not saying you need...